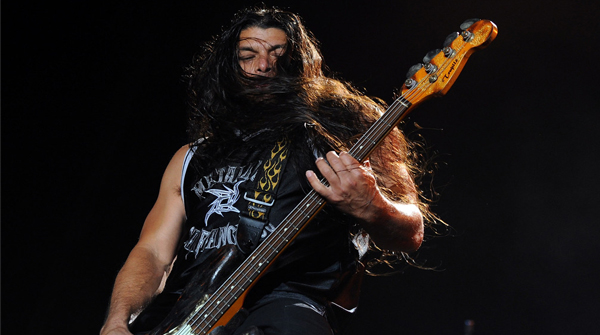 Metallica bassist RobertTrujillo is featured in new interview with the Detroit Free Press in whichhe addresses the band's 2011 collaboration with Lou Reed, thepossibility of making a new album and the Orion Music Festival.

An excerpt from the interview is available below -

On Metallica having the trust of itsfans:

"Yes and no. Obviously there were mixed reviews on our LouReed experience (Lulu - 2011). Some people thought it was anamazing artistic statement. A lot of Metallica fans thought it wascrap. (Laughs) You take chances and kind of go with the flow of it.We just try to have a good time. That's the name of the game - becreative - and sometimes it works, sometimes it doesn'twork.

That's what makes the band special - the fact that Metallicacan go in and play with an orchestra and collaborate with the likesof a Lou Reed, and actually do a bit of improvising in unchartedterritory.

In this day and age, it's important in staying relevant,especially for us. We're inspired by so much, we like to trythings. Sometimes financially it can be a task.

We're there to deliver the passion we feel for music. Whenwe put on the guitars it's like we're kids again. And that'sdifferent from a lot of bands when they get older, to still connectwith music that way. We come up with so many riffs - our problem istrying to keep them all out of one song. (Laughs) It's a goodproblem to have. Right now we're having a hard time focusing onmaking a new record because there's so much else goingon."

Trujillo went on to discuss the upcoming second annual Orion Music + MoreFestival, a music and lifestyle festival curated byMetallica and their friends at C3 Presents.

"The one thing about the Orion festival that's actuallypretty cool is that it's also a lifestyles event," the bassistsaid.

"We're connecting on different musical levels with varioustypes of bands, but also with everyday passions. Last year we wereat the beach, so we had surf, jet skis. We've got a skate zone -legends as well as newer pros - which is great for me. I grew upskating and surfing. I'm still wearing Vans tennis shoes to thisday.

"As far as Lars's situation … he really loves the art offilmmaking. He's on another level. I work on films myself. He's mynumber one guy, my critic - 'Hey, check this rough cut out.' He'svery honest and sincere. He's incrediblyintelligent.

"Hopefully we can keep it going. Orion is a new thing, youknow. It takes time. Putting your own festival together is not aneasy task. It's modeled after the European festivals, with avariety of music, where you might have Los Lobos playing beforeMetallica, and then a pop act after."

Head here for the complete interview.