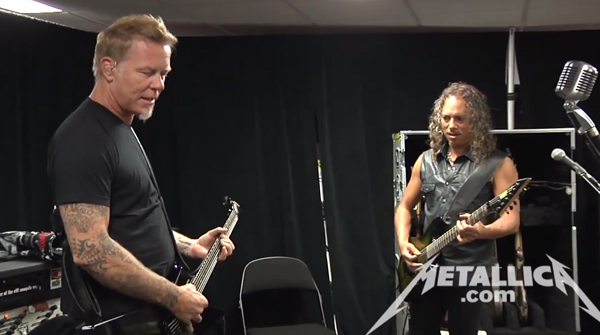 Metallica have released exclusive behind thescenes footage of themselves at their most relaxed as they jam anddiscuss possible tracks prior to them performing in Canada.

The footage was shot in Edmonton, Alberta on August.18thbackstage in the band's tuning room. During the jam session theband can be heard covering an old Discharge cover'The More I See,' along with variousMetallica classics.

The pro-shot footage also features the band performing'Wherever I May Roam' live at the show that same nightwhilst supplying some awe inspiring aerial views of the mammothcrowd in attendance.

The two shows in Edmonton preceded the three show run in Vancouverin which the band recorded their 3-D movie.

Watch Metallica's Behind the Scenes Footage in Edmonton,Alberta.