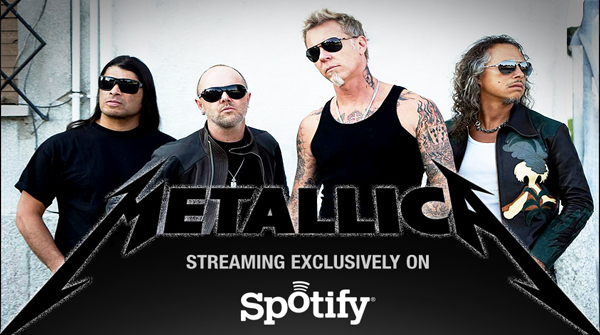 The move follows the Thrash giants recent departure fromlong-time label home Warner after which they promptly announced thelaunch of their own label, Blackened Records.

During an accompanying press event to announce the news drummerLars Ulrich took the stage with his old adversary Parker and,despite the band's previous past concerns about digital music, thepair were all smiles as Spotify announced Metallica's nine studioalbums and various other recordings have been added its growingcatalogue of roughly 20 million songs.

"With the kind of global reach that [Spotify] had, we wereready to jump in," Ulrich told reporters.

According to tech news website CNET, the move is meant to"send a message" that Spotify is a "potent legalalternative" to illegal filesharing and will undoubtedly boostthe service's credibility with other artists.

"We're beyond excited to announce that music from everysingle Metallica album is now streaming on Spotify!" postedthe band on Thursday.

"In our never ending quest for total control of the way ourmusic is presented, we always make it a point to be sure that weare offering you the very best service by partnering withground-breaking technology companies. So with that said, we areextremely proud to be a part of Spotify, who not only has a proventrack record, but is by far the best streaming service."

"Spotify was launched in Sweden in 2008 and has grown into amassive world-wide service with on-demand access to over 20 millionsongs. You can create and manage all your play-lists, share themwith your friends and add to them by importing MP3's you alreadyown. Now you can also take Spotify with you through their newmobile app.

"We're always looking for more ways to get our music out toyou, whether it's streaming live videos through our tour page onthis site or offering downloads of live shows throughLiveMetallica.com. Connecting with Spotify was the next logicalstep and we can't wait to see what the future brings!"

Check out Metallica on Spotify here.