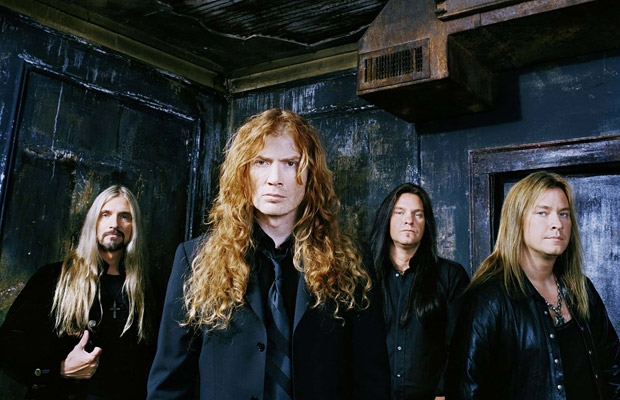 MEGADETH have announced plans to perform their classic album'Countdown To Extinction' in it's entirety on September 7th atTeatro Cauplolican in Satiago, Chile, to celebrate it's 20thAnniversary.

iGuitar Magazine favourite Dave Ellefson was speaking tothe Artisan News about the LP, "'Countdown' was really one of myfavorite records of the whole MEGADETH catalog... for a number ofreasons. Musically, I think it brought together the best of thrash,the melodic part, writing big,

hooky riffs. And that record really launched usinto the mainstream, which opened up a lot of other opportunitesand things for us to do. But more importantly, I think, than all ofthat, is it was a really cool time when the four of us were really,probably, our most connected together as a band."

MEGADETH's fifth LP, "Countdown To Extinction" was released onJuly 14, 1992 through Capitol Records. The band's best-sellingfull-length CD to date, it was certified double-platinum by theRIAA (Recording Industry Association Of America) for U.S. shipmentsin excess of two million copies. The album also produced the band'smost successful hit singles, "Symphony Of Destruction", "SweatingBullets", "Skin O' My Teeth" and "Foreclosure Of A Dream".

Gigantour - the critically acclaimed package festival founded in2005 by MEGADETH - made its highly anticipated return for the firsttime since 2008. The multi-artist bill kicked off on January 26 inCamden, New Jersey and wrapped on March 3 in Austin.

MEGADETH was among the nominees for the 54th annual GrammyAwards, which was held on February 12 at Staples Center in LosAngeles. The band's tenth Grammy nomination was for its new single,"Public Enemy No. 1", off MEGADETH's latest album, "TH1RT3EN",which came out on November 1, 2011.

Watch the Artisan News video and Dave Ellefson's exclusive chatwith iGuitar from Issue 5 about his early days and how he becameinvolved with the bass guitar and Megadeth.