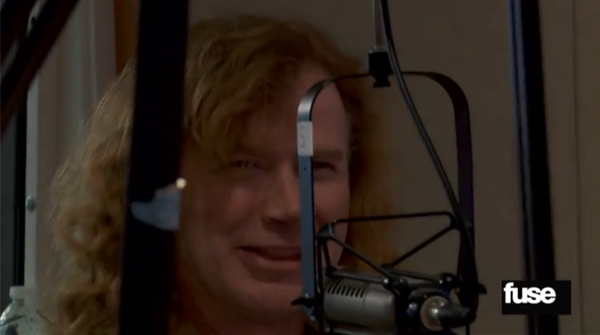 Megadeth paid a visit to Sirius XM Radio in the heart of New York City recently hooking up with SiriusXM Director of Programming & On-Air host, Jose Mangin, to perform a 5 track acoustic set and also give impromptu guitar lesson to Mangin.

The band played ‘Symphony Of Destruction,’ ‘She-Wol,’ ‘Kingmaker,’ ‘Foreclosure Of A Dream’ and ‘Countdown To Extinction’ for SiriusXM's rock channels Liquid Metal, Octane and Ozzy's Boneyard.

Following the set Mustaine went on to give Mangin some helpful advice after he picked up the Megadeth frontman’s guitar to play ‘Holy Wars’ with the rest of the band. Towards the end of the interview, Mustaine presented his Dean Mako to Jose as a parting gift.

The set took place the day after Megadeth performed the second of two headline nights of their Gigantour Festival which took place at the Hammerstein Ballroom in Manhattan.

Currently Megadeth are out on the road in support of ‘Super Collider,’ which when released in June debuted at No.6 on the Billboard 200 album chart.