Megadeth to Release 20th Anniversary Edition of 'Countdown To Extinction' 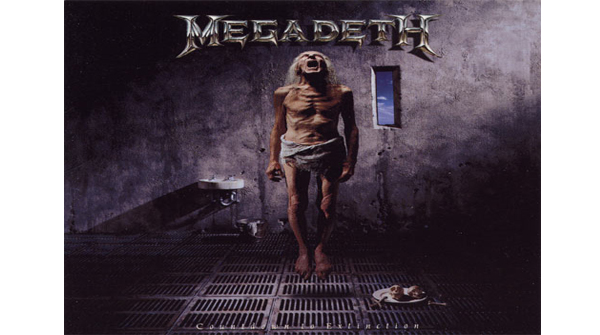 Megadeth are set to re-release one of their mostpopular albums to date in celebration of the record's 20thanniversary.

The album, 'Countdown To Extinction,' will bereleased as a double CD set and digital album on November.6 throughCapitol/EMI. The 20thanniversary edition of the album will come packaged in a lift topbox and will feature a remastered version along with a second disccompiling of an entire live set recorded in 1992 at San Francisco'sCow Palace.

Liner notes have also been written by music journalist KoryGrow, and the reissue includes a 24 x 36 poster and fourpostcards featuring head shots of each member from the Countdownline-up.

The album was Megadeth's fifth studio album and was recorded in1992. It received an official release on July 14th 1992 and to dateis still the Megadeth's bestselling album. It was nominated for'Best Metal Performance' at the 1993 Grammy Awards and the titletrack of album won the Humane Society's Genesis Award.

'Countdown to Extinction' was the second albumfeaturing the DaveMustaine/DaveEllefson/NickMenza/Marty Friedmanline-up. It was produced by Mustaine and Max Norman at TheEnterprise in Burbank, California and was pre-produced by RyanGreene.

1. Skin O' My Teeth
2. Symphony Of Destruction
3. Architecture Of Aggression
4. Foreclosure Of A Dream
5. Sweating Bullets
6. This Was My Life
7. Countdown To Extinction
8. High Speed Dirt
9. Psychotron
10. Captive Honour
11. Ashes In Your Mouth