Matrix Amplification Announce the Release of the GT1600FX Power Amp 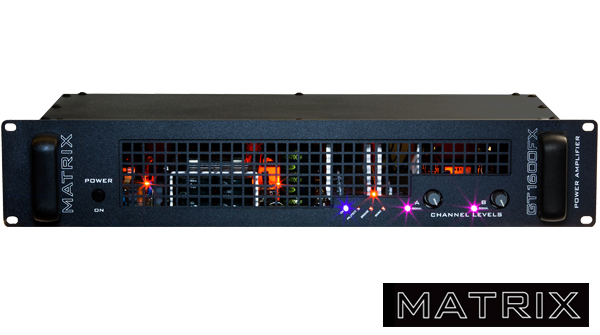 As its name suggests, the GT1600 is a 1600 watt (bridged mono @8 ohms) power amp, part of Matrix's' successful family of GTseries, Class A/B output power amps designed for guitarists wantingultra lightweight, linear, high powered rack mounted amps for usewith modelling and pre amp solutions as well as slave amping andwet dry wet rigs. These amps are gathering a large following withmany players ditching their heavy and expensive valve power amps infavour of a back and wallet saving solution that has zeromaintenance (no expensive tubes to buy) and a sound that manyplayers feel rivals if not betters that of their existing tubepower amps. Even venerable players like Steve Stevens andMegadeth's Chris Broderick to name two, have taken the GT series tothe heart of their rigs, with Steve in particular, replacing theH/H  V800 power amps he's used for the last 20 years in favourof the Matrix offerings.

So that's the pedigree, what's the GT1600 and why on earth thatmuch power?

Bass players are no strangers to high powered amps for their lowend needs and have regularly used PA amps as part of their rigsalong with a pre amp to shape their sound.  Power amp ratingsmay sound huge on the box but usually when you get to the omahgesthat we as guitarist are used to, these large figures drop to amore manageable level. The GT 1600 is no exception giving 800 wattsa side at 4 ohms in stereo mode, 480 watts a side at 8 ohms and 240watts a side in stereo at 16 ohms. Bridged mono modes are 1.6kw at8 ohms and 960 watts at 16 ohms. Compared to other power amps onthe market this gives a player unrivalled power for most cabsolutions as well as giving clean headroom. This amp isn't just forbassists though. Guitarists who need to drive higher rated speakercabs or 7,8 and 9 string players needing to take advantage of highpowered subs will also find the GT1600 to their liking. The ampdelivers this power in a 2U rack mount format at an unbelievable4.7kgs in weight. The amp is kept cool via the use of an ultraquiet 80mm fan, silent enough for studio use if needed butproviding excellent airflow under the most demanding of stagesituations.

Connections on the GT1600 are via Neutrix combi 1/4" XLR inputjacks and combi speakon 1/4" output jacks which give the playermaximum flexibility with a wide range of products. Like all the GTamps the amp has stereo mode where channel A and B inputs feedoutputs A and B respectively, Parallel mode where the input ofchannel A feeds both output A and B, obviously useful when feedingthe amp a mono signal but wanting to use say a 4 ohm cab and an 8ohm cab without linking them or rewiring or providing cabs with thesame mono signal. Bridged mode completes the switching optionswhich enables the dedicated bridged output socket on the rear ofthe unit.

Front panel controls on the amp are simple, with just the powerbutton which provides soft start and the channel volumes providingminimal user interaction. A set of display lights give power on,bridged mode, protect and mono status whilst the signal lights nearthe volume controls give an indication of varying stages of outputlevel.  Along with the rest of the Matrix catalogue, the ampfeatures standard protection circuitry in line with other amps ofthis quality.

Whether you're a guitarist or bassist driving traditionalbackline, or high powered passive full range cabs, the GT1600FXwill deliver the sound, power and quality you're after).

The Matrix GT1600FX is available now at £732* inclusive of VATin the UK or $980* within the USA. For other countries, checkonline or contact Matrix for a quote.