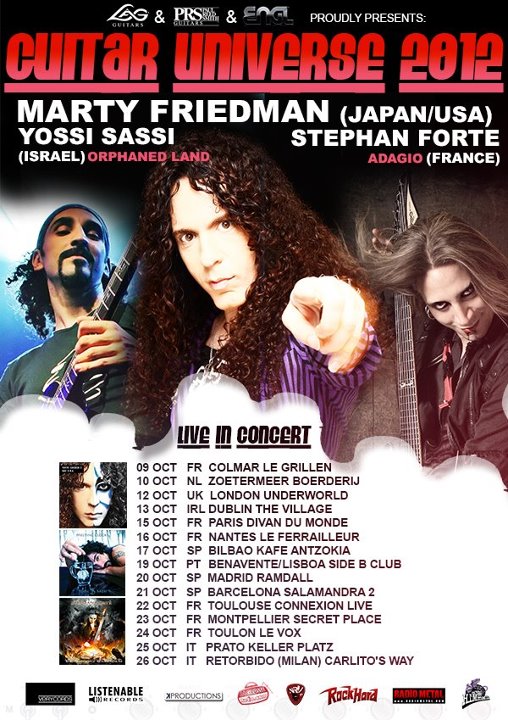 Commented  Marty: "Yossi and I became friends on my 2011 solo tour. We came up with the idea of putting together a concert tour with decidedly unique and exotic guitarists, each from a different part of the world with their own ethnic sound and approach to their music.

"I didn't know just how cool Middle Eastern flavors could mix with amazing rock guitar playing until I heard  Yossi Sassi. I was quite impressed.

"Stéphan Forté will give you an idea what an absolute guitar wizard from France sounds like.

"The tour will happen in October and everyone is in for a once-in-a-lifetime collection of artists from separate corners of the world, and a truly inspiring treat."

The dates are as follows:

As previously reported, three recent albums by  Marty Friedman - whose groundbreaking work with  Megadeth and  Cacophony continues to receive international acclaim to this day - will be released in North America by  Prosthetic Records on August 14. Two of the titles - 2010's  "Bad D.N.A." and 2008's  "Future Addict" - have until this year only been available in Japan, where  Friedman now lives, while 2006's acclaimed  "Loudspeaker", originally released Stateside by  Shrapnel Records, will be made available domestically once again. You can head over to the Prosthetic store now to pre-order a bundle consisting of all three titles.

Friedman rose to prominence when he co-founded the revolutionary guitar band  Cacophony with his friend  Jason Becker. From there, he joined metal legends  Megadeth in 1990, who would soon go on to write and record the thrash metal classic  "Rust In Peace". Throughout his decade-long stint with the iconic group, during which the band sold 10 million albums worldwide, aside from lending his unmistakable "exotic" sound to the band,  Friedman co-wrote the music to several notable songs, including the title track to the multi-platinum  "Countdown To Extinction",  "Youthanasia"'s fierce opening statement  "Reckoning Day" and  "Cryptic Writings"' haunting  "Trust".

During his tenures with  Megadeth and  Cacophony,  Friedman recorded four solo albums for the seminal guitar label  Shrapnel Records. He continued making solo albums after he left  Megadeth in 2000, releasing seven - including  "Music For Speeding", which was released in the U.S. by  Steve Vai's  Favored Nations in 2003 and supported by an American tour alongside  Chris Poland and  Alex Skolnick - over the past decade alone. Until now, most of those releases have been unavailable outside of Japan, where  Friedman moved in 2003.

In Japan,  Friedman became an enigma of sorts: Armed with a fluency in the Japanese language, he left a platinum-selling American band to start from nearly zero to pursue his longtime dream of becoming a unique part of the Japanese domestic music world. That mission was accomplished, for between his solo releases and works with Japanese musicians,  Friedman has performed at the largest venues in Asia, including three shows at Budokan, and played on and wrote several Japanese Top 10 hits, including a #1 single in 2011 and a #3 single in 2012.

At the same time,  Friedman also became a popular Japanese television personality who not only hosted several programs, but was even featured in national ad campaigns for  Fanta and  Sumitomo Bank. He estimates he has made well over 400 network TV appearances in Japan, including three televised sold-out solo performances with the  Tokyo Philharmonic Orchestra.

Although  Friedman has focused on his Japanese music career for the past several years, he has recently remained active in the international metal scene by guesting on albums by the likes of  Jeff Loomis,  Skyharbor and  Firewind; by voicing the character of  "Mr. Gojira" on  Cartoon Network's  "Metalocalypse"; and through periodic tours outside of Japan, including a 22-country European trek with his solo band last year.

Yossi Sassi will release his debut solo album,  "Melting Clocks", in the U.S. and Canada via  End Of The Light Records, with distribution through  DisManic and  eOne Distribution.

"Melting Clocks" was released in other parts of the world in March viaVerycords. The CD, which was produced and composed by  Sassi, features guest appearances by several known musicians, including former  Megadeth guitarist  Marty Friedman.

With over 20 years of experience as a producer, composer/arranger and founding member of  Orphaned LAND,  Yossi continues to soar to new horizons.

Yossi is known for being the constant explorer of sound and musical boundaries, driving inspiration from different cultures around the world.Yossi plays 17 (!) different types of guitars and traditional instruments, and has been invited to play live and share the stage with artists such as  Metallica,  Marty Friedman,  Steven Wilson,  Yehuda Poliker and many others.

Yossi has cooperated and recorded with artists from Kuwait to Portugal. He is a veteran performing artist, with hundreds of global shows and major festivals in his record.

"The Shadows Compendium", the first instrumental solo album fromStéphan Forté, was released in North America on February 28 viaListenable Records. The CD, which came out in Europe in November, was mixed by  Kevin Codfert at  XFade studio in Paris, France.  Stéphanand  Kevin previously worked together on the production of  Adagio's fourth album,  "Archangels In Black".

Stéphan previously stated about  "The Shadows Compendium", "When I decided to record this album, it was obvious that I wanted to work with  Kevin again. We both know each other so well that sometimes we don't even need to talk while mixing.  Kev knows perfectly what I want and I am 100 percent happy with the mix he did on this album. It has been a real work in common since not only he mixed it, but also did the drums programming and, of course, played all the keyboards and piano. On the bass, same thing - it was clear that  Franck [Hermanny] would do the bass. He is one of the most skilled bass player I know in metal, he is in  Adagio with me since day one and just like Kevin, he's one of my best friends, so it could not have been done differently!"

Thanks to Blabbermouth for the report