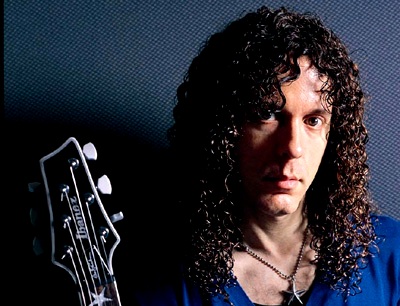 Metalshrine: Have you stayed in touch with DaveMustaine and the other guys through theyears?

Friedman: Not all that much. Not really that much, but notzero. We've been in touch a few times and it's very friendly and Ihave no problem in the world with them and wish them nothing butsuccess and hopefully they feel the same.

Metalshrine: Have you listened to any of the stuff they didafter you left?

Friedman: Actually, I heard the one record they made rightafter I left and that's the last most recent thing I heard oftheirs. That's about it, really.

Metalshrine: I read that one of the reasons that you leftwas that  Megadeth wasn't aggressive enough.Is that true?

Friedman: Oh yes, that's totally true. Totally, totallytrue. At the time when I left it was the beginning of 2000, but Iactually told the guys that I was gonna leave in the middle of '99,but that's another story. I left in 2000 and at that time everyother band was just about a thousand times more aggressive than wewere. At the time you had, I guess, Korn and  Marilyn Manson andeven  Limp Bizkit had stuff that was deeplyheavy and our stuff just sounded thin and small and to my ear itjust sounded really dated and very old-fashioned and traditional.There's absolutely nothing wrong with any of those things and infact a lot of people who are into heavy metal really like thattraditional sound and don't want it to change, so that's a veryvalid point and I understand it, especially since I've beena  Ramones fan since I was a baby. When theychanged just the slightest thing, I got all crazy, so I understandthat, but with a name like  Megadeth and allthe other bands are just blowing you away with this big deep heavysound that is way scarier and way harder and more aggressive than aband called  Megadeth, it was not turning me onanymore. I was like, "Let's do one thing or the other! Let's eitherget friggin' heavier or let's just be a little bit more marketable,because right now, we're kind of an underground band and weshouldn't be. We've got so much great potential within the fourmembers of the band that we shouldn't be an underground traditionalmetal band." That's not where I wanted to go, but maybe that'swhere they wanted to go. It was just a completely musical decisionwhy I left the band and it had absolutely nothing to do with anypersonal problems. I was just seeing all these other bands and Ilove aggressive music, but it's gotta be really fucking aggressive.I hear stuff now like  Decapitated and stufflike that. I would've wanted to play stuff more in that vein thanwhat we were doing. I thought, maybe our first couple of recordswhen I joined the band were kind of aggressive for that time, butthere was so much stuff after it that I would say was trumping usin that department. I know music's not a competition and I wasn'tcompeting, but I just thought that other bands were doing what Ithought we should do better. I don't know why we were always in themid-tempo kind of '80s thrash metal zone and we were all beyondthat, but that's really what I meant back then and I totally meantit.

Friedman: Ahhh, I think I heard one song where Lou Reed is, like, talking or something. I didn't listento it thinking that I was gonna be asked about it, I just remember,"What's this?" Was he rapping or was itspoken-word?

Metalshrine: Yeah, I guess it's more like spoken-wordthroughout the album.

Friedman: Yeah, I don't know. I have noidea.

Metalshrine: But as a musician, could you see yourself doingsomething that's totally different from what you've done before ina way to push things forward?

Friedman: I absolutely believe it and I absolutely get itand I understand it. The thing with Metallica is that they're such a great band and they'vegot so much great stuff already in their history, that they couldjust like fart on a record and people would at least wanna see whythey're doing it, you know. They've got so much great stuff andthey're allowed to be experimental if they want. I have a lot ofweird trippy stuff that I haven't released that maybe if I was in aband like  Metallica, I would have theopportunity to release it, but I kinda keep my stuff a little bitmore to how I'd like to represent myself, but I think all musicianshave a lot of experimental stuff and that's how you grow. I givethem total props and total credit for always being experimental andthat's why they're always one step ahead of the curve in the worldof heavy metal and that's why they're like  The RollingStones of heavy metal. They've always continued toreinvent themselves while keeping that great sound, but I can'treally speak for that whole  "Lulu" album. Idon't think they're gonna lose fans with it, but they have fans oftheir old stuff who are not gonna like it as much most likely, butif they like it, that's all that matters. It really is. Especiallywhen you have a history of success behind you. It takes balls to dosomething that you know your hardcore fans are not gonna like. It'seasy to preach to the converted. It's easy to do that and it's funto do it because everyone's gonna love you and it's great, but ittakes balls to take a risk and even more balls to do it in publicand release it so I give them credit.

Read the entire interview from  Metalshrine.