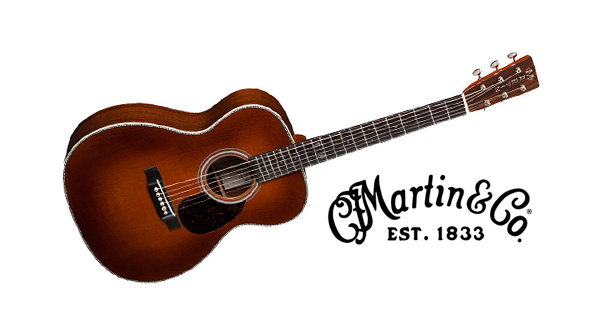 In 2001 Daniels started playing a 1934 Martin C-2 archtop whosebroken top had been replaced with a soundboard of Adirondackspruce, in effect converting it into an Orchestra Model (OM). Thatguitar became Daniels' constant companion in the studio and onstage and it became the template for the Martin OM Jeff DanielsCustom Artist Edition. The model draws inspiration from thetonewoods and appointments of Daniels' original guitar but withsome unique accents suggested by the man himself. The back andsides are rare Madagascar rosewood, the top is Adirondack sprucereinforced with 1⁄4-inch scalloped Adirondack spruce bracing, themodified V neck with long diamond volute is carved from genuinemahogany, and the fingerboard and belly bridge are crafted fromblack ebony. Instead of the usual "natural" finish, the top of theOM Jeff Daniels Custom Artist sports a rare and extraordinarilybeautiful 1932 shaded finish. Also extraordinary are the neck andfingerboard inlays. A Madagascar rosewood headplate provides thebackdrop for a Golden Era style "C. F. Martin" block letter inlayin abalone pearl that replicates the original version on the MartinC-2. Special long pattern diamond and square abalone pearl positionmarkers on the fingerboard lead to happy/sad theatrical mask inlaysin mother of pearl at the 12th fret, which Daniels says fits anactor's guitar.

"My new OM looks great and it has terrific balance all the wayup the fretboard," said Daniels. "I'm noticing a solid low end thatmy original 1934 C-2 seems to lack. I remember striving for thatelement when we were specing it out, so mission accomplished! I'vepassed it around among several guitar playing crew members on setand everyone is impressed with the sound right out of the box -acoustic guitar heaven."

The acclaimed actor has always had a passion for music and overthe past decade, Daniels has taken his passion public with fivealbums of impressive, mostly self-penned songs and occasional toursthat demonstrate that he is every bit as talented behind amicrophone as he is in front of a camera.

"We all know that Jeff Daniels is a talented actor, but I wasunaware of what a tremendous musician, songwriter and guitaristJeff Daniels is," said Chris Martin IV, CEO of Martin Guitar. "Itis obvious that playing guitar is a very important part of hislife. We are greatly honored at the opportunity to collaborate withhim on this special project."

"I am the lucky soul that got to work directly with Jeff Danielsover the past few years on this great little Orchestra Modelguitar," said Dick Boak, Director of Museum and Archives, SpecialProjects for Martin Guitar. "Like a Pegasus, it was reborn from anold 1934 Martin C-2 archtop into a stunning fingerstyle instrument.There are so many songs and stories buried inside this model, butthe best part for me is getting to know this amazing person. Thankyou Jeff!"

C.F Martin & Co. (www.martinguitar.com) hasbeen creating the finest instruments in the world for over 175years. It continues to innovate, introducing techniques andfeatures that have become industry standards including X-bracing,the 14-fret guitar and the "Dreadnought" size.

One of the world's leading acoustic instrument makers, Martinguitars are hand-made by skilled craftsmen and women, who use acombination of new design and techniques along with thoseintroduced by the company founder.

The company is also known for producing high-quality, popularacoustic guitar strings. These include the Martin SP® LIFESPAN™line - the fastest-growing treated string in the industry, and theMartin SP line - which uses an industry leading core wire to holdtunings better.

Martin guitars and Martin Strings are the instruments andstrings of choice for musicians around the world, from the icons ofrock, country, folk and bluegrass to those just beginning theircareers. They can be seen across all segments of pop culture, fromtelevision (Glee, Psych, Raising Hope and American Idol) to themovies; on Broadway and in books, online, and gracing the covers ofpopular magazines on newsstands everywhere. Connect with Martin andMartin Strings on Facebook, Twitter, Tumblr, YouTube andvia www.martinguitar.com and www.martinstrings.com.