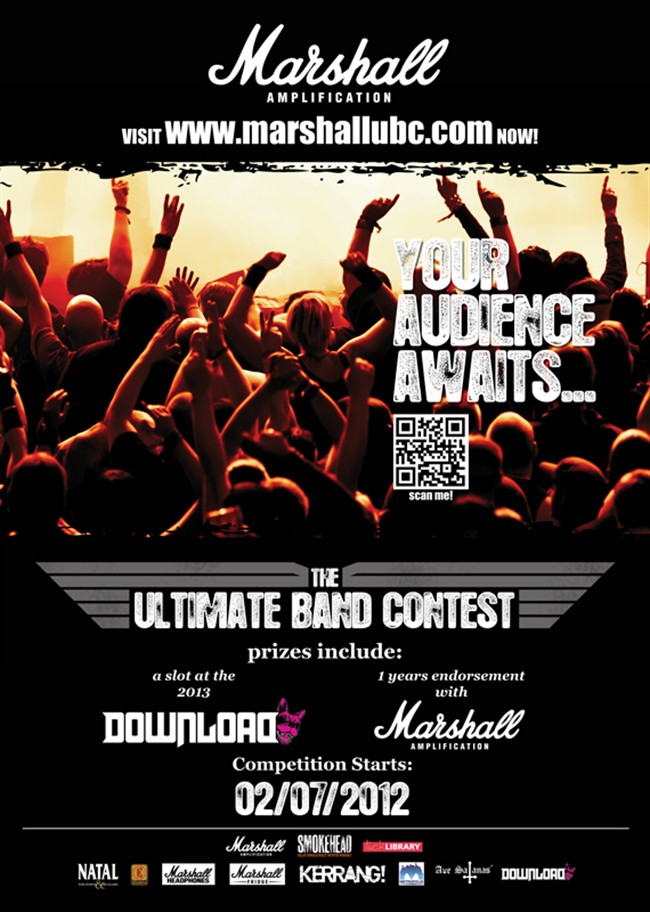 The Marshall Ultimate band Competition returns for its thirdyear and 2012 promises to be the biggest and best Marshall UBC todate!

Marshall have always supported and assisted up and coming bandsin their endeavours to be successful and recognise that bandcompetitions are one avenue to do this. Having sponsored suchcompetitions in the past they decided that they wanted to run theirown competition. One that's free for bands to enter and free forthe fans to vote. The emphasis is on the band, their performanceand musicianship. It is about the music and the performance - thetwo essential ingredients for any successful band. The final isheld in the Marshall Theatre at Bletchley - home to Marshall forthe last 50 years and still the place where they manufacture theirfamous flag ship amps.

Marshall has again been joined by founding partners Lick Libraryand Smokehead whisky who both wish to see greater exposure of youngbands who push the boundaries and go on to become the nextsuccessful band. Add to that Andy Copping of Live Nation has againgiven his support by offering the winning band a slot at Download2013!

Last years winners, Royal Cartel, will be playing on theSaturday at Download this year on the third stage. What band wouldnot be thrilled to win a slot at Download 2013? To have the chanceto perform in front of thousands and be seen by the media, thepromoters, the agents, the managements, the other bands, basicallyin front of everyone in the Music Industry.

As we said earlier, 2012, the 50th year of MarshallAmplification, will be the biggest and best Marshall Ultimate BandContest to date.

Kerrang! have come on board as the official media partner forthe competition and have very kindly offered the winning band theadded chance of an opening slot at a Kerrang! pre-awards show plusa full page in Kerrang magazine dedicated to the winners ofMarshall UBC 2012. Prizes which again reflect the prestige of thecontest and the help that the winning band will get: getting theband noticed, gaining fans and the opportunity to move further upthe road towards success.

Another great prize on offer from, the well known Metropolisstudios is the use of their unsigned mastering service and anattended session to master a 4 track EP which is another foot upthat ladder of success and an absolute must for all bands outthere!

The Contest
Marshall UBC is open to any band over the age of 18. Entries willbe voted through to a "Top 25 entrants" this will be decided up bya combination of 5 entrants who generate the most social media buzzand the remaining 20 will be the publics highest rated. A panel ofofficial judges will deliberate and announce the top 5finalists.

Voting
Voting which will start on 3rd September and finish on 28thSeptember 2012.

Re-entry
Bands can upload more than one video.

The finalists
5 finalists who will play at the live final will be announced on12th October 2012.