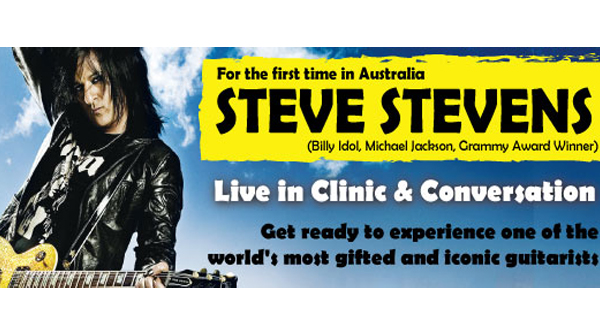 Steve Stevens is one of the most gifted and original guitariststo emerge from the 80s music scene.

As an in-demand hired gun, Stevens has played on recordings byMichael Jackson ('Dirty Diana') and Robert Palmer ('Don'tExplain'). His guitar wizardry featured on the mega-selling 1986soundtrack to the Tom Cruise movie Top Gun, which earned Steve aGrammy Award for Best Pop Instrumental Performance for 'Top GunAnthem.' You can also hear Stevens rip it up on the Once Upon aTime in Mexico, Speed, Coyote Ugly and The Matrix trilogysoundtracks.

Steve launched his solo career with his band Atomic Playboys andrecorded the flamenco inspired Flamenco A Go-Go, the prog-rockinfluenced Memory Crash and collaborated with bassist Tony Levinand drummer Terry Bozzio to release several critically acclaimedalbums. He has taken the reality show plunge, alongside hischarismatic wife Josie, on the E! channel's hit show Married toRock which aired in 120 countries around the world and let viewersin on what Steven's life is like beyond music and touring.

See Steve showcase the latest and greatest gear from Roland andBOSS, including the Roland G-5 VG Stratocaster® and Roland GR-55Guitar Synthesizer plus gain a rare and intimate insight into theworkings of a true guitar hero.

For fans of the enigmatic guitar hero then you'll be pleased toknow that Stevens will indeed feature in an upcoming Issue ofGuitar Interactive Magazine (#16).