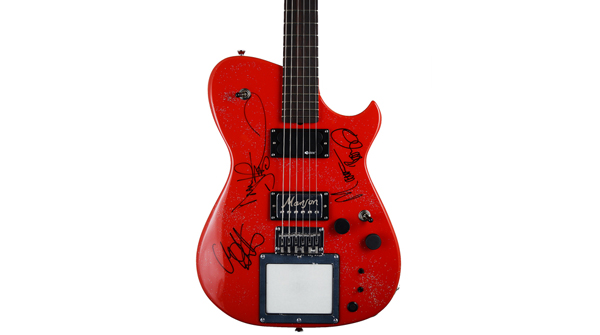 Manson GuitarWorks are offering the opportunity to own one of the mostunique production MB-1 guitars on the planet, with all profitsgoing to charity. The Red Glitter Matthew BellamyMB-1 signature guitar, signed by all members of Muse,was selected from the extremely limited number of instruments madeavailable each year, specifically to raise funds for theProgressive Supra Nuclear Palsy Association and Marie Curie at thesuggestion of Manson Guitar Works director Adrian Ashton.

"This is a fantastic opportunity for someone to own what isalready an extremely limited guitar but with the very rare andadded exclusivity of the band's signatures present as well. I'mvery grateful for the band signing the guitar and to Matthew forletting one of these great guitars being made available for my twochosen charities."

As the pictures show, the guitar is a Red Glitter MB-1, whichwill come complete with hard case, hand-signed certificate ofauthenticity and also sports exclusive black custom hardware,making it the top spec model available. The last autographed MansonGuitar by all three members of Muse fetched Â£33,000 when Musecollected a Silver Clef award at the Nordoff Robbins charityawards.The MB-1 guitar currently for offer was signed before theband's performance in Los Angeles earlier this year. All profitswill be divided between the two chosen charities and Manson GuitarWorks are inviting private bids between now and the end of July toconclude the sale of the guitar. If you would like to own a uniquepiece of rock memorabilia and support two fantastic charities thenplease contact sales@mansonguitarworks.com

For further information on the nominated charities pleasevisit: