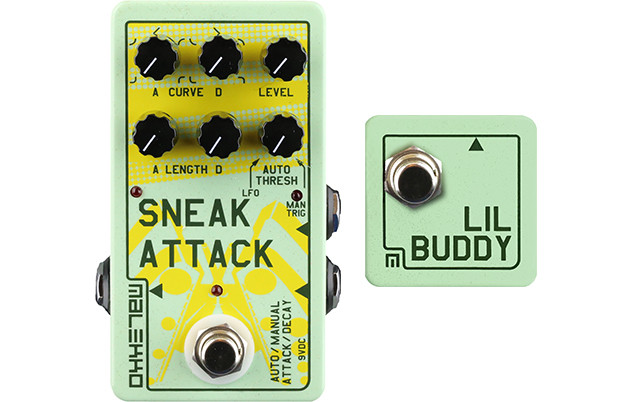 (PRESS RELEASE): Following the successful releases of Scrutator and Charlie Foxtrot pedals in 2015 comes Malekko's official NAMM announcement of their latest invention Sneak Attack and it's side-kick Lil’ Buddy. Sneak Attack is based on their new digital pedal platform and has been designed with every intention of pushing boundaries or in this case, the envelope.

Sneak Attack is a digitally controlled analog VCA pedal that can also be manually triggered or used in a tremolo mode. The core of the pedal is an Attack/Decay envelope generator with separate length and curve controls for both the attack and decay segments. The envelope can be triggered or cycled in several ways using the input signal, built in footswitch, Lil’ Buddy footswitch or external clock/click track. Lil’ Buddy also expands the feature set to include tap tempo and additional, unique control over the attack and decay.

For more information on Malekko’s Sneak Attack and Lil’ Buddy.