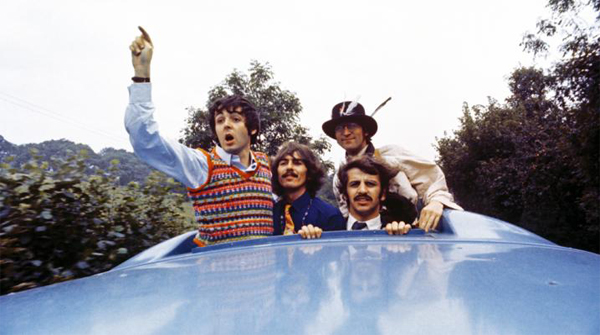 The Beatles controversial third feature film'Magical Mystery Tour' is rumoured to be making its way toBlu-Ray & DVD this October.

A description for the "Revisited" film, which is described as an"Arena documentary telling the story behind The Beatles'polarising third feature, screening alongside the filmitself," gives a few details
of what fans can expect:

"In September 1967, The Beatles made their third filmfeaturing six new songs - a dreamlike story of a coach day trip tothe seaside. It was seen by a third of the nation, at 8:35 on BBC1on Boxing Day in black and white, and all hell broke loose.'Magical Mystery Tour' was greeted with outrage and derision bymiddle England and the establishment media. 'How dare they?', theycried - 'They're not film directors, who do they think they are?',they howled. Where were the four lovable moptops of 'Help!' and 'AHard Day's Night'? Now, after 45 years, this virtually forgottenfilm has been fully restored and, screening alongside it, BBC TV'smulti-award- winning 'Arena' tells this greatest of untold Beatlesstories with contributors including Paul McCartney, Ringo Starr,Paul Merton, Terry Gilliam, Peter Fonda and Neil Innes. Roll up forthe Mystery Tour!"