Lowden Hits the High Notes with Production of Landmark Guitar 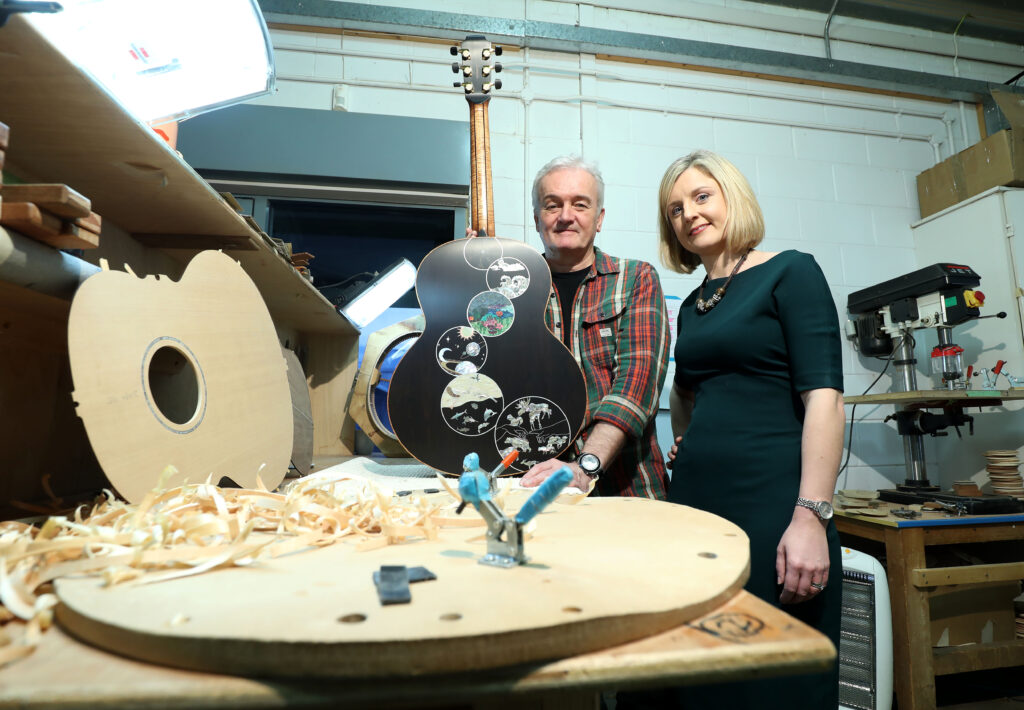 Lowden Guitars has handcrafted its 20,000th guitar, a significant milestone for the Downpatrick business. In three years since receiving a significant loan from the Growth Loan Fund, the company has created 13 jobs and expanded its workshop from two to nine units.

Founded by George Lowden in 1974, the firm now employs 29 highly skilled workers to produce handcrafted instruments that are in demand throughout Europe, North America, Canada, Australia and the Far East. George’s high quality instruments have been used by some of the world’s most famous artists, including Gary Lightbody, Ed Sheeran, Eric Clapton and Foy Vance.

Speaking about the 20,000th guitar, Mr Lowden commented: “The Genesis guitar is the most unique piece we have ever created. We have been working on this project for over a year now and not only is it stunning to look at, but the sound it produces is also incredible.

“A piece of the guitar was sent to an artist in America and he has created a phenomenal piece of artwork, inlayed in to the wood itself.  We’ve taken our time on this project because I wanted to create a truly spectacular piece to mark such a significant milestone for us.

“We’ve already sold the guitar to a local buyer and, while I can’t tell you how much it went for, we believe it is the most expensive guitar ever made in Ireland and possibly Great Britain.

Mr Lowden said the company has come a long way since it received funding from the Growth Loan Fund. The loan had, he said, enabled the company to begin a five year plan in response to an order book with a huge backlog of orders. Today, the popularity of its guitars means Lowden still has a year’s worth of orders.

“We’ve expanded our premises in Downpatrick, created further employment in the local area and developed our production with new jigs and equipment. Business is about relationships and our partnership with WhiteRock and the Growth Loan Fund has been nothing but positive and an important part of the success over these last few years.”

Looking ahead Mr Lowden said: “We have a good reputation for building high quality guitars and that is something we would never want to compromise by growing too fast. Our goal is to continually improve our production methods through fine tuning and innovation to ultimately increase output.”

“Next month we will showcase The Genesis guitar and present our new range and designs at the 2017 NAMM show in Anaheim, California which has over 100,000 attendees. Throughout 2017 we will also continue to visit new markets.”

Rhona Barbour, Senior Portfolio Manager at WhiteRock Capital Partners, said: “Since we provided funding to Lowden Guitars in 2013, the business has subsequently grown its market presence and created 13 highly skilled jobs in the local area.

“George and his team place an emphasis on R&D and are using a blend of traditional and cutting edge techniques to craft stunning guitars. The business demonstrates potential for further growth and is one of the Growth Loan Fund’s greatest success stories.”

WhiteRock Capital Partners LLP, which is authorised and regulated by the FCA, was established in 2012 to manage the Fund and is owned by a consortium of three partners – WhiteRock Finance Limited, NEL Fund Managers and Clarendon Fund Managers.

Companies seeking funding from the Growth Loan Fund must be based in Northern Ireland, demonstrating growth and generally be in the manufacturing, engineering or tradable services sectors.  Loans will be typically unsecured and personal guarantees will not be sought.