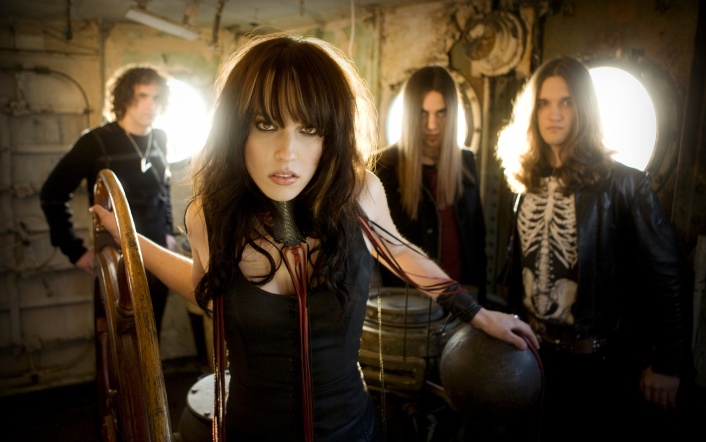 Atlantic recording group Halestorm has made history with their electrifying new single, "Love Bites (So Do I)." The track -- featured on the Pennsylvania-based band's breakthrough new album, "The Strange Case Of..." -- has ascended to #1 at Active Rock radio outlets nationwide, marking the first ever female-fronted group to top the format's airplay ranking.

Halestorm will celebrate its sensational success with an epic summer touring schedule, comprising a U.S. headline trek, high profile festival appearances, a series of much-anticipated European dates, and a number of support slots alongside Avenged Sevenfold (see itinerary below). In the meantime, the band is currently wrapping up a major U.S. tour alongside Godsmack and fellow Atlantic recording group Staind. The "MASS CHAOS 2012" tour continues through a May 16th finale at Manchester, New Hampshire's Verizon Wireless Arena. For up-to-the-minute details and complete ticket information, please visit www.halestormrocks.com/tour.

Produced by Howard Benson (who previously collaborated with Halestorm on their self-titled 2009 debut), "The Strange Case Of..." includes such explosive tracks as "Here's To Us," which shot to #1 on iTunes' "Top Rock Songs" chart after being featured in a February 2012 episode of Fox's hit series, Glee. In addition, the album's "Freak Like Me" is featured in a new live video heralding Halestorm's upcoming tour schedule. The clip will made available exclusively to members of the band's official "Eye of the Storm" fan community before being showcased across the myriad Halestorm online platforms.

Along with its popular success, "The Strange Case Of..." has also drawn critical acclaim, with Billboard praising the collection as "full of chugging riffs, wailing solos, drums that kick like a boot to the gut, and never-out-of-style soft/loud dynamics that lead to massive choruses." "Led by one of our favorite rocker babes, singer-guitarist Lzzy Hale, (Halestorm) promise a more personal album for their follow-up," noted Revolver in its album preview. "But don't expect them to get all sappy on us. There should still be more than enough of the band's now signature raucous attitude and righteous riffs for any headbanger to get off."

Formed by frontwoman Lzzy Hale and her brother, drummer Arejay Hale, Halestorm has been hailed far and wide as an incendiary force in modern hard rock. "Halestorm" made a top 5 debut on SoundScan's "Hard Music" chart upon its 2009 release, simultaneously bursting into the top 40 on the comprehensive Billboard 200. The album subsequently sold more than 300,000 copies, and half a million cumulative tracks. Produced by Howard Benson (Daughtry, My Chemical Romance, Flyleaf), the album earned extensive acclaim for its infectious hard rock anthems, sexy hooks, and rough-and-tumble grooves.

"The Strange Case Of..." marks Halestorm's first full-length release since last year's "ReAniMate: The CoVeRs eP," which saw the band putting their unique stamp on a diverse collection of classic songs, including tracks by Guns N' Roses, The Beatles, Heart, Temple Of The Dog, Skid Row, and Lady Gaga. Halestorm also unleashed their first-ever live CD/DVD, "LIVE IN PHILLY 2010," featuring such favorites from the band's self-titled debut as "It's Not You," "Familiar Taste of Poison," and the rock radio smash "I Get Off."

True road warriors, Halestorm made its bones as a major league hard rock outfit via countless North American gigs alongside such artists as Shinedown, Avenged Sevenfold, Bullet for My Valentine, and Disturbed. Last year saw the band traveling the country on the blockbuster "Avalanche Tour 2011," joining such hard rock luminaries as Stone Sour, Theory of a Deadman, and fellow Atlantic recording group Skillet.