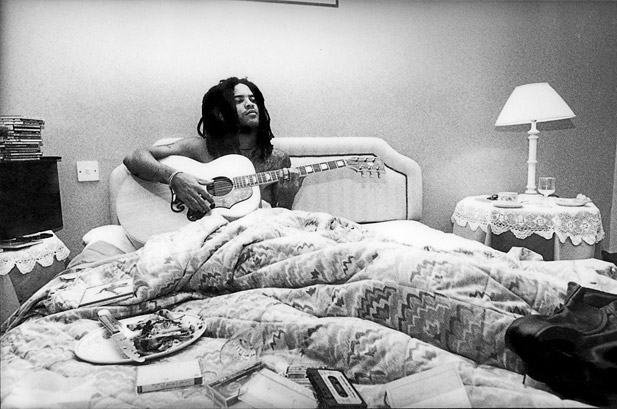 Lenny Kravitz is set to release a new Deluxe Edition of his 1991sophomore album 'Mama Said' on June 5th.

Soul-rocker Kravitz spoke with Billboard.com about theforthcoming release and the inner turmoil he was going through in aperiod of his life he says 'was just spinning'.

Just off touring to support his debut album, "Let Love Rule,"Kravitz tells Billboard.com that, "It was a crazy time. My ex-wife(actress Lisa Bonet, who he divorced in 1993) and I were goingthrough issues. I just had my child the year before ('Let LoveRule' came out). I was adjusting to success and...fame. It was alot to deal with. I ended up kind of going into hibernation, 'causeat that point I went through a pretty serious depression. I justlet all these feelings out onto the songs. It was very catharticfor me."

For the Deluxe Edition of "Mama Said," Kravitz raided his vaultsto create a two-disc package that features 21 bonus tracks, 15 ofwhich have been previously unreleased. The treasure trove featureshome demos of "It Ain't Over 'Til It's Over," "The Difference isWhy" and "What the...Are We Saying?," remixes, instrumental takesof several tracks and eight songs recorded live in Japan and inRotterdam, Netherlands. The set also includes two previouslyunreleased (and unfinished) songs, "Riding on the Wings of My Lord"and the instrumental segue "Framed, Lying, Crying."

"You forget about all these things," Kravitz notes. "Then youlisten and you're like, 'Oh, man, wow!' These were things I didn'thave time to finish, or I didn't feel they were (right) for thatmoment. I was tempted to finish them off and put vocals on them andwhatnot, but I said, 'Y'know what, man -- no. Let it be what itwas, from that time. Don't bring this into this time period.' But,yeah, it's interesting to find that stuff."