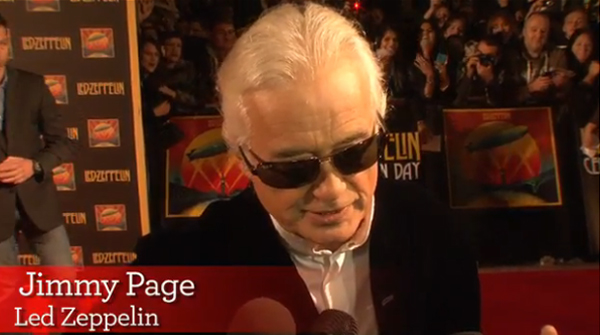 On the 27th December 2007 one of the greatest UK rockbands of all time reunited for a one-off tribute concert in honourof Ahmet Ertegün at The O2 Arena in London.

Considered one of the biggest reunion shows of all time, the gigstill holds the world record for the 'Highest Demand forTickets for One Music Concert,' according to the Guinness Bookof Records.

However, whilst many of us have wated the best part of five yearsfor an official DVD announcement, Led Zeppelin'sJimmy Page has revealed it took two years before he,Robert Plant & John Paul Jones got togetherto watch the footage.

Speaking to NME at theLondon premiere of Celebration Day, Pagesaid:

"It was important that if we were going to do [a reunion] atall, that we went out there and did it properly. We put a lot oftime and effort into it so that it would be what you're going tosee now, which is just one show - that's all we did, no warm-upgigs, no follow-up. It wasn't designed to be a film at all. That'swhy it's taken a little while to come out, because we didn't evenlook at it for two years after we'd done it, so we could be a bitmore objective about it."

Celebration Day will be screened in cinemas fromOctober 17. It will then receive a general DVD release on November19. A deluxe edition will also include footage of the Sheppertonrehearsals, as well as BBC news footage.