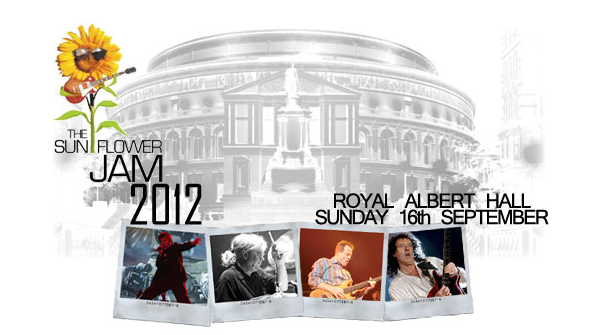 Members of Led Zeppelin, IronMaiden, Queen & DeepPurple all performed at the sixth annual Sunflower Jam charityconcert in London this past weekend (Sept.16).

The show kicked off with Brian May and West End starKerry Ellis performing a number of acoustic songs, afterseveral numbers and a cover of Guns N' Roses 'November Rain' bySandi Thom, Iron Maiden frontman Bruce Dickinsonappeared to perform Thin Lizzy's 'Emerald' and The Who's 'BehindBlue Eyes'.

Later on in the showcase rock legends Jones, May and Paice allpartnered up for a rendition of Deep Purple's 'Black Night', whileMay also played guitar during Alice Cooper's performance of'School's Out'.