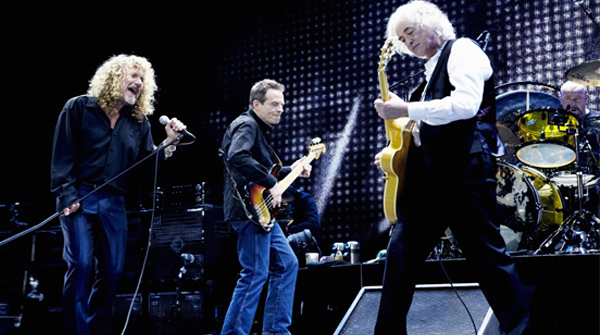 Led Zeppelin were asked by ex-US president BillClinton to reunite once again last year in order to perform at the12-12-12 Hurricane Sandy Benefit Concert, but he was unable to talkthe remaining members of Robert Plant,Jimmy Page and John Paul Jonesinto playing.

Clinton, who served as the 42nd President of the United Statesfrom 1993 - 2001, met the band while at their Kennedy Center Honorscelebration at the White House in December of last year.

During the event president Barack Obama had thanked and praisedthe rock godfathers for "making us all feel young" afterlast year's release of live DVD 'Celebration Day,' recorded in2007.

David Saltzman of the RobinHood Foundation recently explained to US TV show 60 Minutesthat he and Hollywood producer, Harvey Weinstein had a plan tobring about a Led Zep performance.

"There were two bands that we were desperate torecruit. One was The Rolling Stones, the otherwas Led Zeppelin. [Film executive] HarveyWeinstein had this great idea that we could enlist BillClinton to convince Led Zeppelin to reunite, toperform at the 12-12-12 concert."

"So, Harvey & I got on a plane and flew down to Washingtonto meet with President Clinton, who was going to be seeing themembers of Led Zeppelin, who were being honored at the KennedyCenter. And, you know, the President was terrific. [He said]'I really want to do this; this would be a fantastic thing. Ilove Led Zeppelin.' AndBill Clinton himselfasked Led Zeppelin to reunite and they wouldn't doit."

The Rolling Stones  headlined the eventalongside a host of major artists including BruceSpringsteen & the E Street Band, BonJovi, Eric Clapton, PaulMcCartney, Billy Joel and others.