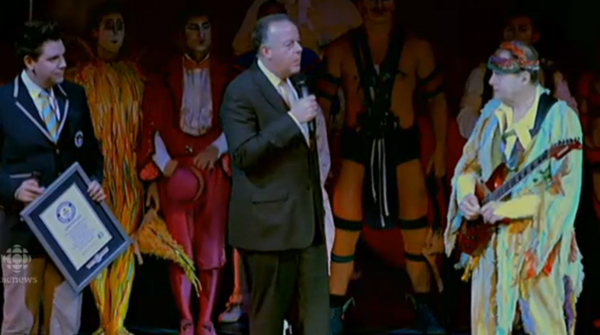 A Las Vegas based guitarist has broken the world record of most theatrical performances by a male musician.

You would easily be forgiven for missing Bruce Rickerd amongst the many extravagant performers who make up the “Mystere” show at the Treasure Island casino. But the Ottawa born guitarist is there and has been present for the troupe's last 10,000 shows.

Rickerd and his band has been tasked with tying both music and sound effects with the action on stage, and has done so for 21 years.

Prior to his world record breaking achievement, which will actually stand at 9,958 shows until the Guinness record-keeping body can prove his involvement in the remaining 42, Rickerd said:

“This is not work for me." - Which might go some way to explaining such a tenacious and determined work ethic.

However, Bruce couldn't be more down to earth about his accolade. A member of the show joked that he’s got Cal Ripken Jr., who played a record 2,632 consecutive baseball games for the Baltimore Orioles, beat.