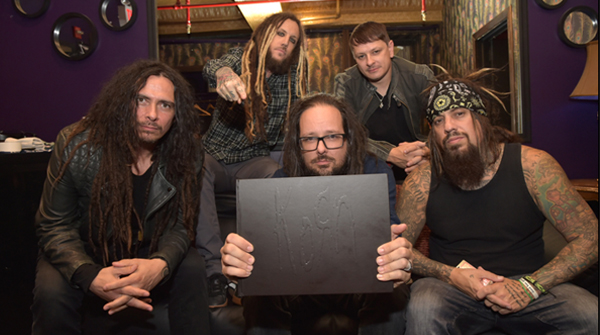 Fans can pre-order the photo book exclusively via Pledge Music for $55 (with a deluxe package available for $90 that includes the photo book and a limited-edition litho print of the band's debut album cover) up until Tuesday, October 20 and then the book will be available at kornmerch.com from release day, October 27. All fan pre-orders via Pledge Music will be shipped on Wednesday, October 21. Additionally, the book will be available for purchase at the last seven tour dates (Dallas, TX on October 20 through Oakland, CA on October, 30) on their current fall tour. Full tour itinerary below.

The 20th anniversary shows, which started in 2014, were so well-received that the band--Jonathan Davis (vocals),  James "Munky" Shaffer (guitar), Brian "Head" Welch (guitar), Reginald "Fieldy" Arvizu (bass) and Ray Luzier (drums)--wanted to bring this iteration of the live show into an intimate setting for the core fanbase. The band's month-long tour around the U.S., during which they're performing their self-titled debut album in its entirety, wraps up October 30 in Oakland, CA. At each show, fans get to experience KORN at an intimate venue, two decades later.

Korn's self-titled debut album, released in May, 1994, has been heralded by Rolling Stone as "...the most important metal album of the last 20 years." Produced by Ross Robinson, the critically acclaimed album features singles "Blind," "Shoots and Ladders," "Clown" and "Need To." With little mainstream support, Davis' dark and disturbing lyrics alongside the band's new and unique hyper-aggressive soundtrack, KORN went on to sell over two million albums worldwide.