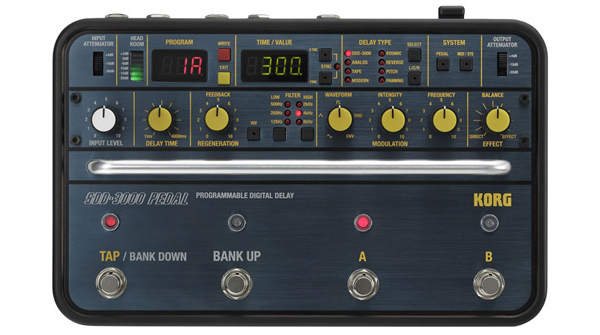 The original Korg SDD-3000 rack-mount digital delay from 1982 has been meticulously reproduced and is now available as the SDD-3000 Pedal.

It offers the distinctive delay tones of the original that have been sought after for decades, in a sturdy, stompbox design. This new version offers the acclaimed sound of the classic model along with all the functionality of a modern, boutique delay effect unit with rich and detailed tone that complements every genre and playing style.

The SDD-3000 Pedal was developed in collaboration with veteran guitar tech Dallas Schoo of U2 to help reclaim the most coveted tone of the original unit, add some modern stage-ready enhancements, and appeal to the digital delay enthusiast. It features:

• Interactive controls that include tap-tempo, a modulation waveform selector, and selectable filters for delay repeats

Two bypass modes are included—true bypass and analog—to suit different needs. Analog mode offers direct sound that has been routed through the preamp circuit and adjusted by the gain setting to an appropriate level. True bypass will not affect the sound in any way.

The preamp circuit featured in the SDD-3000 Pedal stays true to the unmistakable, original “SDD sound,” offering a natural reaction to individual playing styles, as well as slightly saturated and compressed tone. It can be removed from the signal chain (via true bypass) to allow players to keep their sound intact without the delay.

The SDD-3000 Pedal is also equipped with a highly interactive modulation section. This feature allows players to experience five different Waveforms, intensity and frequency controls, and the ability to create custom sounds that combine two different types of Waveforms. Players can produce a variety of modulation effects, including chorus, flanging, pitch bending, doubling and Doppler effects, then save sounds to one of the 80 programmable banks.

Check out the video below, which features U2 guitar tech Dallas Schoo.