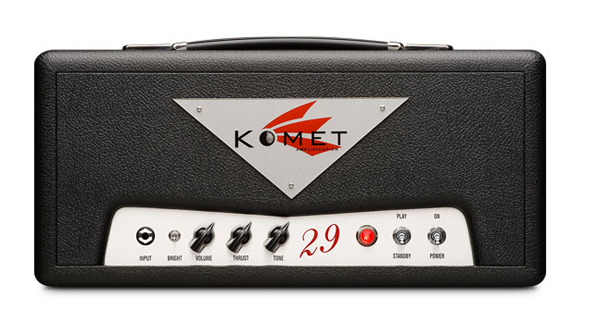 Komet Amplification is now shipping its new Komet 29 guitar amplifier. Available in an amp head and in a 1x12, 2x10, and 2x12 combo amp, the Komet 29 is extremely responsive to the player’s touch, delivering notes that bloom into harmonic feedback at will. Powered by four EL84/6BQ5 cathode-based output tubes and featuring custom-designed output and power transformers, it delivers a surprisingly muscular 29 watts RMS for a loud, clean sound with rich harmonic layers, plenty of bottom end, ample headroom, and a large, three-dimensional soundstage. Its preamp employs two 12AX7 tubes with plenty of gain.

The Komet 29 is designed for practically any playing style, whether using single-coil or humbucking pickups, and covers tonal ranges from shimmering clean to crunchy rhythms and searing leads. By omitting extras such as reverb, loops, and boosts, the signal path stays pure and clean, enabling the amplifier to deliver outstanding transient response and amazing clarity.

Between the thrust, tone, volume, and bright controls, you can conjure a vast range of timbres. The tone knob offers a smooth, mellow sound at low settings and a sharper sound at higher settings. It interacts well with a 3-position bright switch that fine-tunes the amplifier’s treble content. Raising the volume knob makes the amp “gainier,” as well as louder.

Also on the top panel are power and standby switches and a status light. The rear panel sports two 1/4" speaker outputs, a 4/8/16 ohm impedance selector, a standard IEC power jack, and the mains and HT fuses.

Komet has earned a reputation for workmanship and sound quality that are second to none. In that tradition, the Komet 29 uses a laser-cut, aircraft-grade, solid aluminum chassis chosen for specific electrical properties and utilizes only the best-sounding and most reliable parts, handwired with loving attention to detail.