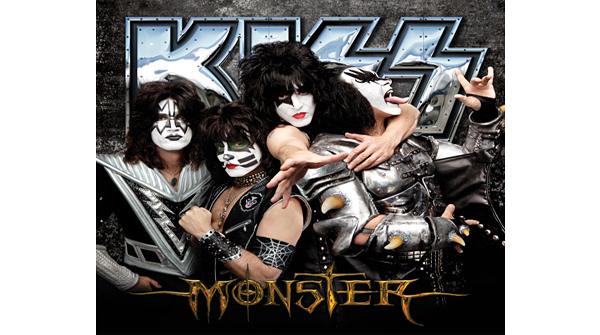 The Paul Stanley produced, 'Monster' will be released on October15th in the UK and October 16th in the US and will feature a totalof 13 tracks which include recent single 'Hell Or Hallejulah.'

Bassist Gene Simmons said of the album that Kiss are "goingwhere no bands have gone before" and gave praise to the band'snewer members Tommy Thayer and Eric Singer for their "workethic".

He said of 'Monster': "There are no symphony orchestras, boychoirs, keyboards, outside producers or songwriters on this album.The best thing we did was to turn inwards to ourselves."

He continued: "Tommy and Eric have revitalised this band with awork ethic and the talent to back it up. This is a real bandeffort. Kiss has become a behemoth. We're going where no bands havegone before."

Simmons believes 'Monster' to be "one of the best or the atleast the top three albums" the band have ever produced. Similar tothat of 2009's 'Sonic Boom' LP, Kiss kept the 13 track 'Monster'raw -"

"It's just guitar and drums, nothing else," said Simmons.

KISS are expected to return to the UK for a full tour in thecoming months in support of the new album.

The tracklisting for 'Monster' is as follows: