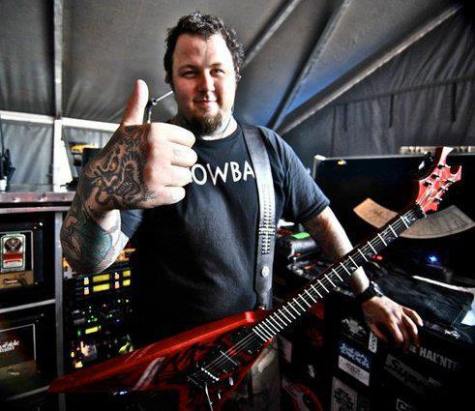 Slayer guitarist Kerry King has paid tribute to his longtime guitar technician and friend, who passed away on Saturday (31st March, 2012).

"Holy shit. Never thought I'd be writing this. "The world lost a great man yesterday.

"It was an incredibly rough day for me, I can't imagine what it was like for his family and Cassie [Armand's longtime girlfriend Cassandra Dines]. Needless to say, no one saw this coming.

"I thought I had a great guitar tech until the day I retire. "Life is short. Enjoy what you have while you have it.

"I was one of the few lucky ones. I saw him Friday, played him some new SLAYER and watched him bang his head and play air guitar.

"What a great dude!! I even got what may have been his last man hug.

Dave Lombardo (SLAYER): "SLAYER and the metal road crew community is mourning the loss of a hard worker and dear friend Armand Butts Crump III. He was the best, he had to be to work for Kerry King. I'm going to miss him fucking with me from stage left. I still can't believe it. We are deeply saddened. RIP ABCIII."

GUNS N' ROSES: "We are deeply saddened by the tragic loss of our colleague and friend. Your spirit lives on! RIP Armand."

Phil Demmel (MACHINE HEAD): "It's times like these when I realize how much I take for granted how lucky and blessed I am to have my health and the love of family and friends. My thoughts and prayers go out to Armand's family. The world is a darker place without you my friend, you will be sorely missed."

Zach Myers (SHINEDOWN): "For the big man with a even bigger heart ... Boise tonight is for Armand! Thanks for being so nice to me."

Alex Skolnick (TESTAMENT): "One of the best guitar techs I've ever known, Armand Crump - whom I borrowed from my friend Kerry last year - has passed away. RIP AC."

Randy Blythe (LAMB OF GOD): "A bro died - Kerry King's tech Armand Crump. Known him for 12 years, from the very first LAMB OF GOD tour when he was with AMEN. RIP bro. We will miss you"

Rob Dukes (EXODUS): "I will miss you my friend. Me and John are gonna take our ride in your honor. You will be missed."

Doc Coyle (GOD FORBID): "Sad to hear of Armand Crump's passing. Known him for 11 years and he's always been cool to me. Hopefully he's doing shots with Dime and Jimi."

Paolo Gregoletto (TRIVIUM): "Just heard about Armand, Kerry King's tech, passing away. He was a very nice dude and always treated us well when we toured together."

Matt DeVries (FEAR FACTORY, CHIMAIRA, SIX FEET UNDER): "Armand was a such a great dude and was always nothing but kind and helpful to me when I was in Chimaira. RIP brother."

Brian Fair (SHADOWS FALL): "So sad to hear about Armand Crump passing away. Was a great friend for years. Teched for Amen on one of the 1st ever Shad tours. RIP brother."

Jamey Jasta (HATEBREED): "My heart hurts for the friends & family of Armand Crump. He always made me smile. R.I.P."

EMG: "SLAYER tech Armand Butts Crump passed away today. We don't have any of the details but our hearts and thoughts go out to the SLAYER camp and all of Armand's friends and family. Armand was a really kick-ass guy and one hell of a tech... It's a sad day to lose someone so talented and so young. R.I.P. brother..."

Brian Slagel (Metal Blade Records): "This is terrible, Armand was such a great guy. We are saddened by the tragic loss. Your spirit lives on! RIP Armand."

Video footage of Armand Crump taking Dunlop TV through King's live rig back in 2010 can be seen below.