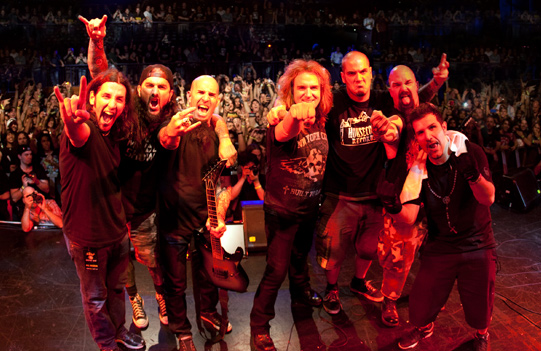 Kerry took time out to speak with Loudwire about the Metal Masters experience for him, Slayer'snew album, this years Mayhem Festival and much more. Read anexcerpt from the interview below, you can read the full interviewat the Loudwire website.

What does being part of Metal Masters mean toyou?

It's a blast, it's cool to play with guys who aren't the sameguys you been playing with for 30 years, it's fun. I been playingwith Phil [Anselmo] since before 'Cowboys From Hell' - everybodyelse I've known longer so it's cool.

When you were first approached to join Metal Masters,what went through your head?

It depended who was in for one thing. Once they told me Philsigned on, I'm like, "Alright, lets resurrect Phil and let peoplesee him do heavy metal that he hasn't done in 12 years." He's stilla metal force so we're onstage with him and there's some fury goingon. It's awesome.

Part of Metal Masters is about sharing techniques withthe fans. If you could get a lesson from a musician, dead or alive,who would it be and why?

Probably Randy Rhoads, I'd say Dime [Dimebag Darrell] but wewere friends - I'd like to have another night with him sure, not sosure about a lesson. You can't go wrong with Randy Rhoads.

How would you describe the Metal Masters experience forsomeone who may not be familiar with it?

It's really cool man, the stage we have is far too cramped foras many people that are up there. I don't even think I'm gonna goon stage right, you'll see a mess of stuck guitar players indifferent parts of the stage not able to get to their pedals. It'sgonna be cool, we're playing fun songs, Phil rehearsed for this, Iknow he sounds great so I'm looking forward to that.

There are some really young kids here who are musiciansthemselves looking at their idols onstage, what advice would yougive them?

If you're gonna try this f-in' whirlwind, you better dosomething you like or the fans are gonna see right through it.

Well Slayer fans aren't giving up, you guys are headedback into the studio, can you tell us about what fans can expectand the progression of the album so far?

We've only been working on it for a couple of weeks right now,since our producer from the last record had a small window and meand Dave [Lombardo] are working on nine songs so we thought wecould get in and finish two or three and demo everything else sothat's what we're trying to do now. I don't know if anything willcome out by Mayhem or not, hopefully we'll get two done and we canget it out to Mayhem.