Kasabian's Tom Meighan: "We try to invent ourselves like Radiohead do" | Guitar Interactive Magazine 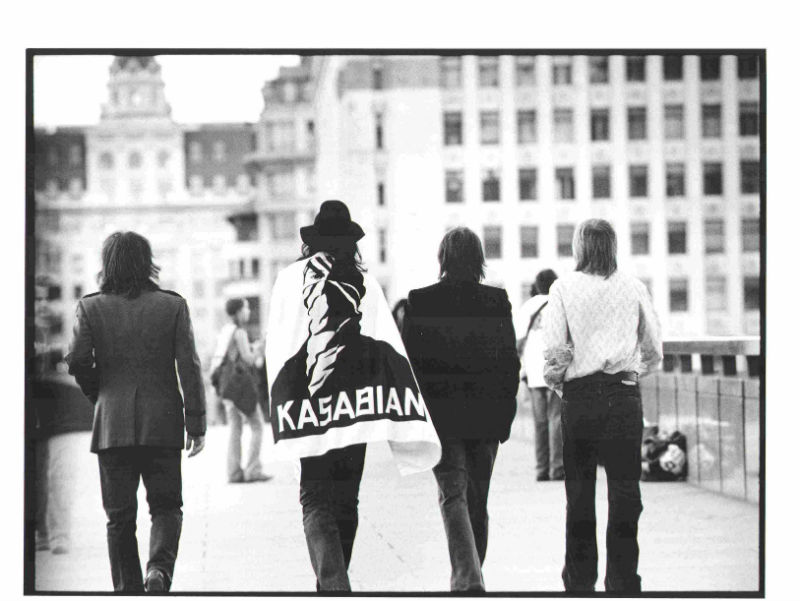 In a recent interview with Buzzinemusic, Kasabian's frontman Tom Meighan has revealed how the band are constantly on a mission to reinvent themselves and develop with their sound from album to album in a similar fashion to Thom Yorke and his band Radiohead.

After a five year period away from the USA, the band are back stateside to promote their latest reinvention 'Velocirator'. Speaking with Buzzine's Andrew Shaw, Tom also went on to explain the differences between the leicester band's third offering 'West Ryder Pauper Lunatic Asylum' and their new LP to clarify his point. '''West Ryder' was our concept record," he said. "We were gonna make our crazy, psychedelia record, which it was, with all these crazy songs in it and then 'Velociraptor!!' was back to normal, 'back-to-basic' songwriting. Good songwriting, good pop songs.''

Last month, Kasabian unveiled the new video for their track 'Neon Noon'. Shot by the band's priniciple songwriter and guitarist Serge Pizzorno at  his home, using only his mobile phone and four mirrors. Pizzorno also revealed that he been inspired to shoot the video after seeing "psychedelic images" projected by his son Ennio's night light. You can watch the video at the botom of the page.

Kasabian will headline both Reading And Leeds Festivals and T In The Park this summer and are also confirmed to play shows as part of Ibiza and Majorca Rocks.

An excerpt of the interview follows:

Andrew Shaw: On Velociraptor!, you headed back into the studio with Dan the Automator (who wrote with you on the West Ryder Pauper Lunatic Asylum as well): Why did you call him back in?

Tom Meighan: Dan the Automator is easy to work with, so we thought, "Well why not?" [laughs]

He's got a great ear for opening our music up, and I don't know what he does, but he does something to it. Probably gives it more space…and he's a really nice guy as well. He's definitely out there [laughs]. Velociraptor! came around, so I said, "Let's just go back into working with Dan the Automator again." So it was cool. And the process of it - the whole thing, recording it, is very calm. We record very much like a garage rock band. It's weird. And it's not as if we jack off to each other. Like, "Just one word; trying to get it right for the whole day". We do a few takes and we pick the best one or the best vibe - and that's pretty much how we work.

AS: You've got all that space to spread out, and get that Kasabian sound…

TM: Yeah! We're very 'studio professional'. We're really on board. We're good in the studio. We're really straight on it. Dan The Automator helps with that.

AS: Sergio [Pizzorno] once said that as a band Kasabian are really aware of the prudishness in modern music. I think he used the phrase: "Nobody's breaking the glass anymore." Was there a point in Velociraptor! where you could say, "That's the glass broken"?

TM: Basically, what Serg was saying there, is that we try not to do what we did before. We always try to reinvent ourselves in the way that a band like Radiohead would do. Or we come at things from another angle. [Laughs] I'm at a loss for words really - But basically, "Switchblade Smiles" is the emergency, 'break-the-glass' moment - It's got everything to it.

AS: "Switchblade Smiles" is a way of saying, "This album has arrived"?

TM: Yeah! That's when we knew. It's like a defining moment. But "Days Are Forgotten" for me... When we did that, I thought, "Yeah. This is it. This is the boy. This is the baby here."

AS: You started the recording back at the end of 2010, and you released the album last year. Now you've had time to live with it, what were you most pleased about?

TM: When you release an album, it's out there, it's for everyone to hear, and it's not your baby anymore. And you're very proud. When you're in the studio creating it, sharing with just a few mates or whoever - it gives them a blast and it's great… But once it's out there, it's really out there… and it's just crazy, really. The other night, me and Serg were on the tour bus, we actually put our record on - Velociraptor! - and we had a jazz-cigarette and we had a chat, and we listened to it.  The album was so beautiful and colorful. We gave ourselves a nice pat on the back. We don't really do that a lot, but we did. I was, "Ain't that great?" And he was like, "Yeah, that's great, Tom. Wow!" And that was a "Well done". But, your question... the thing I'm most proud of on the record?…oh wow... the whole thing is great really. I like "Neon Noon." - the last song on the album. It's kind of Pink Floyd, "Wish You Were Here." Serg said that, anyway: It's just beautiful...

To read to full interview go to www.buzzinemusic.com