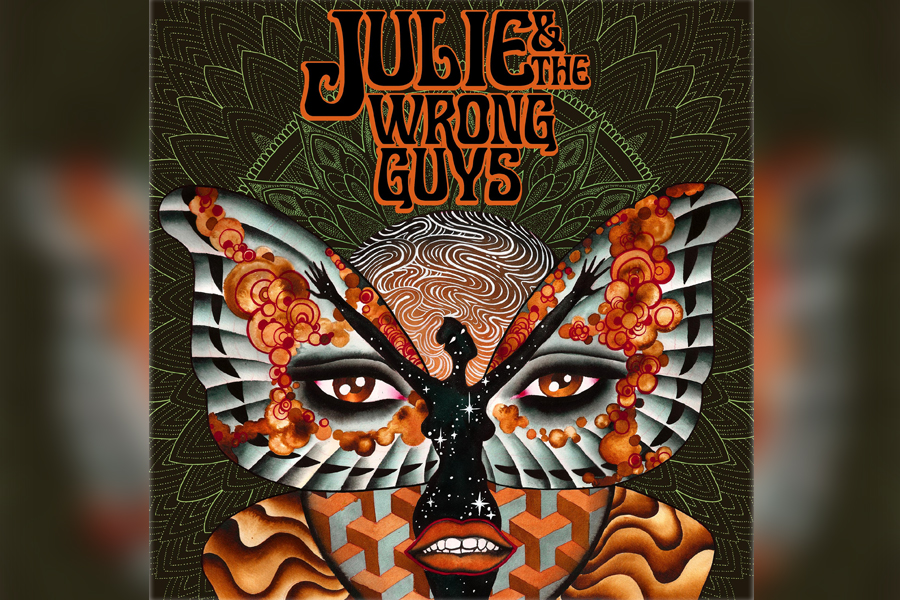 Julie & The Wrong Guys - who originally emerged late last year with a split 7” single release - is the new incarnation from New Brunswick native and Polaris Prize-nominee Doiron, who joined the Sub Pop-signed Eric’s Trip as an 18 year old. Since the cult outfit’s disbanding back in 1996, Julie’s solo career has taken in over 10 studio releases (issued variously by the likes of Jagjaguwar and Sub Pop, and sung in both Doiron’s native English & French), collaborative projects with Mount Eerie and Okkervill River, and the Juno-winning album ‘Julie And The Wooden Stars’, recorded with the Canadian indie band of the same name.

‘Julie & The Wrong Guys’ finds Doiron bringing her story full circle in some senses, returning to her garage rock foundations, bolstered here by the driving rhythm section of Toronto’s Cancer Bats, alongside the fuzzed-out guitar sounds of fellow Canadian McGrath. The four somewhat unlikely collaborators originally came together back in 2011, when Julie recruited Peters, Schwarzer and McGrath to step in as her live band across a run of Canadian solo tour dates. Sensing something more permanent in the live & songwriting rapport they fast established as a four piece, they re-paired in the autumn of 2016 to the backwoods of Red Rock Lake, Manitoba to translate their live alchemy into a record.

Whilst Doiron has cemented her position as Godmother of Canadian indie rock down the years with her subtly nuanced songwriting, across ‘Julie & The Wrong Guys’ her delicate, emotionally evocative vocals have evolved into a perfect foil to the heavy blows of her bandmates’ sound. On piss-and-vinegar lead single ‘You Wanted What I Wanted’ she carves out moments of genuine vulnerability (We thought we saw the future / Is this what we wanted?) between a chorus barbed enough to bring her voice not far from cracking - “I was channeling my inner Kim Gordon!” Julie recalls.

The cool takedown of ‘Condescending You’, a track which originally appeared on a 1997 solo record of Julie’s, takes on towering new proportions - Doiron’s multi-tracked vocals land their defiant blows, amidst McGrath’s guitar squalls, whilst barely breaking sweat. Elsewhere, material originally hewn from Cancer Bats’ writing sessions has been assimilated just as deftly into ‘Julie & The Wrong Guys’. Mike and Jaye actually began hashing out ‘Farther From You’ whilst on tour in France - “We started working on this track during a Cancer Bats soundcheck,” says Jaye; “But it really didn’t come together until we were together in Red Rock Lake. Something about the combination of the October sun and early morning chill on one of those days really gave this song its depth and reason”.

As much as ‘Julie & The Wrong Guys’ finds its titular Julie locating a fits-like-a-glove creative niche, it also speaks of an altogether more personal newfound sense of assurance. Beneath the grungy, cyclical guitar of album standout ‘Call My Own Shots’, Doiron’s gutsy vocal counsels as much to her audience as herself on a need to push past uncertainty and divest self-doubt, driving the track onto its propulsive, upwards spiraling outro. Fittingly, ‘Julie & The Wrong Guys’ opens on the very first track that Julie, Eamon, Mike and Jaye collectively penned. Recalling the writing of the breathless, pummeling ‘Love And Leaving’, Jaye laughs; “Eamon had a crummy recording of it and never forgot it, which we are all very thankful for now, ha!”.

And so, ’Julie & The Wrong Guys’ emerges as a record unequivocally greater than the sum of its parts, with its disparate members reconciling their own antecedents to come out of the woods with one of the most exciting and jaw-dropping debut albums of the year.