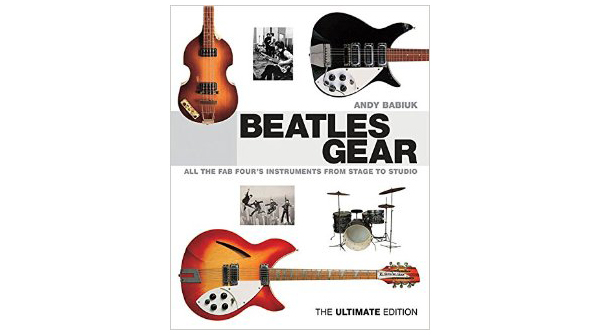 A rare guitar find has dominated recent headlines and captured the imagination of Beatles fans all over the world. John Lennon's original 1962 J-160E Gibson Acoustic guitar, a significant instrument in the history of The Beatles, had been lost for over 50 years. The guitar has recently been identified and is featured in Andy Babiuk's new book due out this fall, Beatles Gear - The Ultimate Edition, published by Backbeat Books.

Babiuk, the leading authority on equipment used by The Beatles, was contacted earlier this year by John McCaw regarding an old J-160E that he owns. "I get calls and email all the time from people telling me that they think they have an instrument owned by The Beatles and 99% of the time it's nothing," said Babiuk. "But there was something about McCaw's story that was intriguing."

Upon a physical examination of the guitar, Babiuk was able to match the wood grain in the guitar's spruce top to photos of Lennon playing a J-160E guitar with The Beatles in the early 60's. "Wood grain is like a fingerprint, no two are the same, and without a doubt it is a match," he said.

"It's one of the most important of all Lennon's guitars, as he used this J-160E to write some of The Beatles' biggest hits, and played the guitar on countless live performances and on many Beatle recordings," he adds. "It is one of the most historically important guitars to ever come up for auction."

Babiuk reveals details about John Lennon's Gibson J-160E in his new book, Beatles Gear - The Ultimate Edition. Since this is a find of historic proportions, the book's publisher, Backbeat Books, decided to feature the guitar on the cover of the revised and expanded edition of this best-seller.

Beatles Gear -The Ultimate Edition will be available on October 27, 2015. A tome with more than 500 pages, the book will provide new insights about the gear the Fab Four embraced throughout their brief but revolutionary career, from their earliest days as The Quarrymen to the dissolution of The Beatles in 1970. John, Paul, George, and Ringo's moves from cheap early instruments to the pick of 1960s technology are carefully and entertainingly documented in an easy-to-read narrative, fully illustrated with many previously unseen photographs, a cache of rare memorabilia, and a unique collection of specially photographed instruments used by the Beatles.

John McCaw, the current owner, has consigned the historically significant guitar to Julien's Auctions, the world's premier entertainment and music memorabilia auction house, which will offer the Lennon J-160E for sale this November 6th and 7th at their annual Icons & Idols: Rock "n" Roll auction in their Beverly Hills Gallery. In an exclusive special engagement, the guitar will go on display prior to the auction at The LBJ Presidential Library in Austin, Texas, from June 13-29 for the opening of The GRAMMY Museum® and Fab Four Exhibits Ladies & Gentlemen...The Beatles Exhibition! It will then be displayed at the GRAMMY Museum® in Los Angeles from July 2-September 7, 2015 and at Julien's Auctions Beverly Hills from November 2-6, 2015.