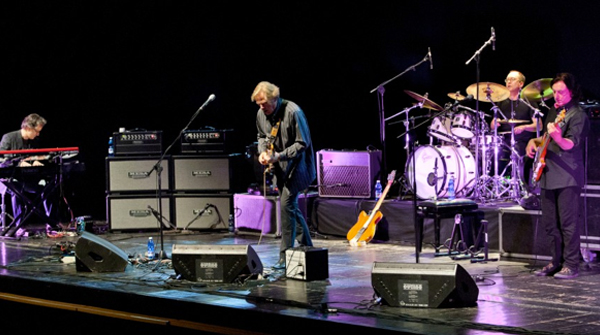 Virtuoso guitarist, John Jorgenson, who has worked with artists as diverse as the likes of Bonnie Raitt, Elton John, Sting, Bob Dylan and Luciano Pavarotti is about to embark on a tour of Europe with his own band.

For this series of shows John was looking for a fixed bridge guitar. "I was really impressed with my friend Jerry Donahue's  Fret-King Black Label FKJVBK  I tried out at NAMM Show," says John (John was a member of The Hellecasters alongside Jerry Donahue and Will Ray). "It played and sounded excellent. I was curious to try Jerry's pickup and electronics setup on a semi acoustic body and rosewood fingerboard…"

Over to guitar guru and Fret-King designer Trev Wilkinson who set to work putting together a unique, one-off Fret-King Black Label Series Country Squire Semitone  guitar to John's specs within a couple of weeks in time to ship it out to Verona, Italy for the first show.

An enthusiastic John emailed over:

"The guitar arrived safely and it's fantastic! I used it last night for a short performance and it sounded and played really well. Tonight I'll give it more if a workout on a full show and let you know my other thoughts, but first impression I love it!!"

The John Jorgenson Electric band tour dates are as follows