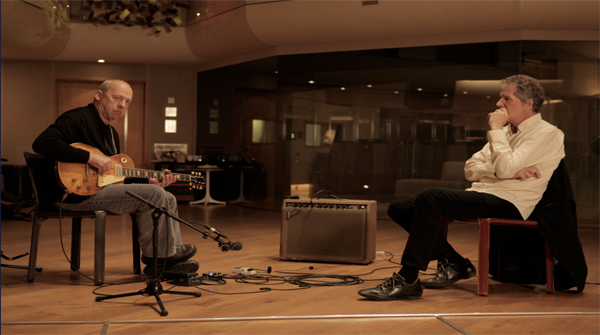 Knopfler's 60min story begins in his hometown of Newcastle andthe shop where his dad bought his first guitar, the Hoffner SuperSolid and ends in New York, where Rudy Pensa's famous Pensa guitaroriginates and Long Island where John Montelione's renownedworkshop resides.

Knopfler shows Ilsley where he learnt to play his National SteelResonator with legendary
British blues guitarist Steve Phillips, made famous by DireStraits 'Brothers In Arms' album cover. Knopfler treats viewers tothe infamous riffs on his beloved National of 'Romeo and Juliet'and even joins Steve Phillips for a set at his local. The journeyconcludes with Knopfler and Illsley performing together once againin New York.

"What started out as a simple chat about guitarists and thechoices they make, turned into the programme 'Guitar Stories'. Theguitar is probably the most played instrument in the world and theone that dominates so many different genres of music. I have alwaysbeen fascinated by the relationship between the player, theinstrument, and their music and in this first programme we followmy great mate, Mark Knopfler. on a journey from Newcastle to theworkshop of John Montelione in Long Island as he chooses his 6favourite guitars."

"One of the really special things about this film for me isthat John (Illsley) coaxes insights and stories we've never heardbefore from one of the true guitar greats. To have been there as hedid that is one of the highlights of my career. I still get chillsthinking about Mark talking about the musical roots of 'Romeo &Juliet' and then playing it kind of just for us but now foreveryone else to see too."

"We loved the idea of Guitar Stories as soon as John pitchedit to us. Using great musicians' favourite guitars as a mechanismto explore their career allows us to understand so much more abouttheir life and work. Added to that is the bonus of having John as areally wonderful and natural interviewer and storyteller. We lovethe resulting film and look forward to making many more 'GuitarStories' in the future."

Guitar Stories is a Mob Film Company production in associationwith Red Arrow Entertainment for Sky Arts. It is produced by TomBarbour-Might and directed by Vadim Jean. The Executive Producersare James Baker and Ian Sharples and Jonathan Rothery forSky.

The Mob Film Company is partof the Red Arrow group of production companies. Red Arrow is backedby Pro7Sat1 Group and has built a series of investments withproduction companies in the UK, Europe and the US. Sales anddistribution for Guitar Stories is being managed by Red ArrowInternational.