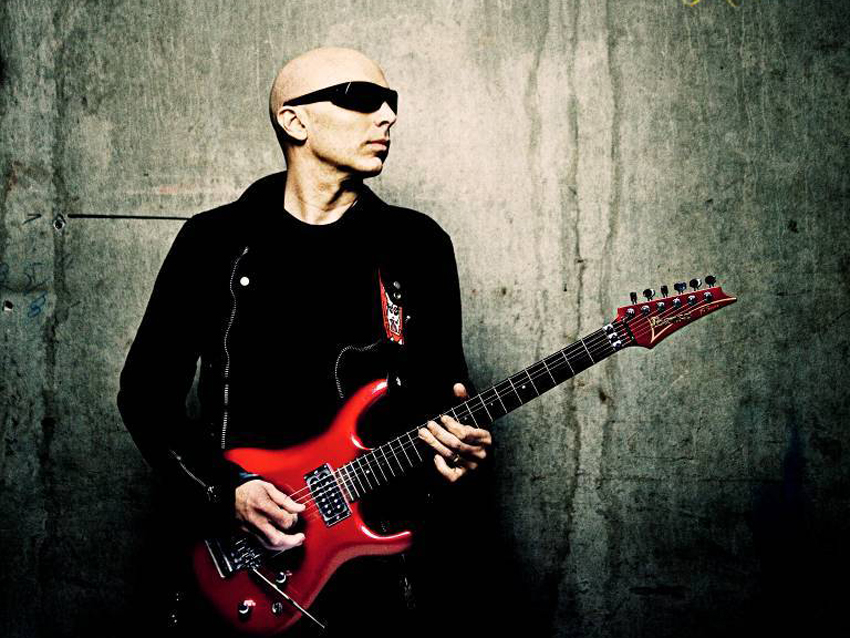 Powerline recently spoke to Joe Satriani about the release of the live-concert film, "Satchurated: Live In Montreal", which was filmed on December 12, 2010 at the Metropolis in Montreal, Canada during Satriani's "The Wormhole Tour" supporting his studio album "Black Swans And Wormhole Wizards". Read an excerpt of the interview below.

Powerline: How do you feel this live album is different than the previous ones?

Satriani: Besides the obvious 3D thing and it being in theaters - that's huge - but content-wise the biggest difference is that this is a concert where we played 100 percent of the  new  album onstage in front of people. When we filmed that night [for  "Satchurated"] - because of time restraints - we ended up taking two songs out of the set. But we filmed and recorded us playing those during soundcheck, which is also part of the DVD package. That part of it is sort of a new chapter for the fans who have our other DVDs. I think people understand that when you're out there touring, you're always playing most of your catalog and a little bit of a new record - getting your fans familiar with the new album. This serves the live performance really well but it can make people at home who primarily buy the DVD of the tour scratch their heads because they wind up getting versions of the same song over and over again. And basically it's your hits. There are certain songs in my catalog that the live  audience demands that we play. You know, if we don't play  "Flying In a Blue Dream", people walk out of the show being upset because they may see us only once in their life and they really want to hear that song. But that's at odds with the DVD process, you know. So on that particular tour - the  "Wormhole" tour - I kind of put my foot down and said, "Damnit, we're gonna play the whole new record live somehow," and by the time they filmed us we had some experience. We'd already been to Europe and we were coming close to the end of our U.S. run, so the show was getting to be more of a well-oiled machine. We had arranged the set  pretty well. It was an intense show from a musician's point of view and emotionally very cathartic for me to go through all that material every night. So it made the DVD very unique, especially when you put it up against  "Live In Paris",  "Live in San Francisco",  "Satriani Live!" and the  "G3" DVDs.

Powerline: Why did you choose the Montreal show?

Satriani: It was a practical matter, actually. We were approached just a few weeks before filming, to do the film, by [filmmakers]  Pierre and  Francois Lamoureux. So, we only had about four shows to choose from. One of them was in New York City, which would have been a nightmare of costs - union and all sorts of other fees - and there were other places where the shape of the venue did not allow for cameras. It just so happened that  Pierre andFrancois' hometown of Montreal not only had a venue that, although smaller than what we were used to, had a  beautiful  look and sound to it. It did afford the placement of two sets of cameras - both 2D and 3D - and it just so happened that that week we were going to be playing in Montreal. A lot of the talent that they wanted to draw from, from the film community, was available. We got what they told us were their favorite guys for camera work, lighting work, sound recording. And that team was a really stellar team and they were able to get it together for only one show. Because we only filmed one night. It wasn't like we had a whole week to put this together. It was another one of those make or break kind of things. And the audience in Montreal that night was just fabulous.
Powerline: You mentioned the word cathartic before. Was there a certain song that emphasized that word the most?

Satriani: Well, probably for me, "Littleworth Lane." When I decided to film that night, it didn't really cross my mind until I got closer to the date that it was the one year anniversary of my mother's passing away. And although leading up to it I thought I put the grieving process in order in my mind, in my heart, but the night before it all just came back. I was going to be in New York the following night, which is where I'm from, and my family was, and it was going to be my first show in New York in my whole solo career that my mother wasn't gonna be at. And it affected me more than I thought. So I wound up not sleeping the night before and showing up at the venue a bit of a basket case. It's an odd thing. When you are a performer of any kind and you are carrying around some sort of extra emotional weight, I think you sometimes put up a wall to protect yourself. So you wind up not looking like you're troubled. You look almost the opposite. But, in fact, there was a lot going on inside and it came out through the performance. I can laugh at it now because it's something my mother would laugh at. She had a great sense of humor. She loved show business and she would have been the one pushing me onstage saying the show must go on. Put all your feelings into your playing. So that's what happened that night, and I remember right before I played "Littleworth Lane" I wasn't even aware of what I said to the audience but it made absolutely no sense. Because I thought, whatever you do, do not tell people how you're really feeling. Then you'll just break down and the whole show will stop. Let's just say by the time I walked off stage I felt like an emotional wreck.

Powerline: Do you find a lot  CHICKENFOOT fans crossing over to your solo stuff now, and vice versa?

Satriani: I think so. I think there's a lot of cross over there. There are quite a lot of fans of mine that probably had not paid too much attention to  Sammy Hagar and I think the opposite of that is true over the years and they started to sort of cross pollinate, to a certain extent. But we're so different. I think that's why  CHICKENFOOT is something that is artistically successful. It's an unlikely pairing of four people.

Powerline: Did you ever imagine  CHICKENFOOT being this big? It really took off. You can call it a supergroup, I guess.

Satriani: Yeah, I was always scratching my head because when we did the first record it took so long and we played together so little. We were literally recording the album and we never done one show together. And , you know, we would meet up for a few hours and then after two days there would be two songs recorded on album and then I wouldn't see them for two months. (laughs). I kept thinking, "This can't be the way a supergroup records an album." You know, it's crazy. To tell you the truth, I remember when we realized we had finished recording that first album and no one had actually listened to all the songs in a group. And slowly over that Christmas vacation, people started to email each other saying, "Have you listened to the songs? I think it's an album." I think we were surprised at what it was. Because, maybe in our minds, we thought if I ever played again together with  Chad,Michael and  Sammy it's gonna sound like it but it didn't. I think it sort of surprised all of us, what the  CHICKENFOOT sound was.

Read the entire interview from  Powerline.