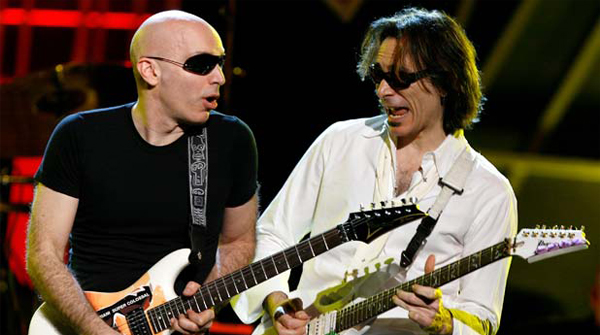 Joe Satriani & Steve Vai are to once again host "A Benefit for Cliff" in memory of A&R titan, Cliff Cultreri.

The third benefit concert in support of the music industry veteran will take place on Friday 12th June at the Wiltern Theatre in Los Angeles.

Both Satriani and Vai, who have hosted benefit shows for Cultreri in 2006 and 2011, will perform at the event along with progressive metal trio, Animals As Leaders.

Several artists have donated items to be auctioned at the event such as autographed guitars and a chance to join Satriani’s G4 Experience, which takes place June 28th to July 2nd in Cambria, California and a package to attend Steve Vai’s, Vai Academy 2015: All About the Guitar, in Vail, Colorado, August 2nd to 6th.

"I'm looking forward to sharing the stage with my good friends Steve Vai and Animals as Leaders for a night of unforgettable music,” Satriani said.

Vai added, “It’s a great privilege to take to the stage with my friends Joe and Tosin [Abasi] in support of our dear buddy Cliff. It’s a great cause and will be a magical evening of guitar extravaganza."