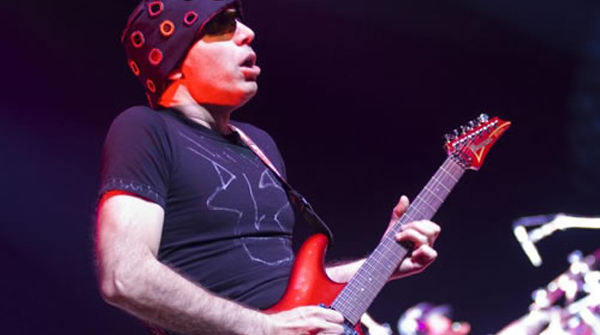 "Now that the asteroid has safely passed us by, I feel it'stime to break my cyberspace silence and let you all know what I'vebeen up to these last few months.

"After returning home from the last of three incredible G3tours, I got down to writing music for a new solo record. A veryprolific and cathartic two months followed resulting in a bundle ofnew music I was very excited to get recorded.

"With 16 of the songs selected for the project, all headingin different directions and touching on a variety of musicalinfluences, I realized I needed to assemble a new studio band. Theidea was to crank up the energy level of the sessions, and allowfor more individual expression of the material, from each player. Ipulled into Skywalker Sound with Mike Keneally on keyboards, ChrisChaney on bass and Vinnie Colaiuta on drums. The chemistry betweenthese awesome players was fantastic, and we blazed through all thetracks with everyone laying down amazing performances.

"On Valentine's Day I finally finished all the overdubs,reviewed the tracks with engineer/producer Mike Fraser and startedloading out of the studio, elated! Now it's on to Vancouver,British Columbia, to mix.

"The new record will be called 'Unstoppable Momentum' andshould see a release date of May 7th. I'm not sure how many songswill make it to the final sequence as I still have a lot of workahead of me in that department.

"As you can see from the tour page [on my official website], we are gearing up to bring the new music on tour starting inmid-May and continuing through 2013. My touring band will consistof Mike Keneally on keys and guitar, Bryan Beller on bass, andMarco Minnemann on drums. I'm so excited about tearing it up onstage with this new band! See you out there on tour..."