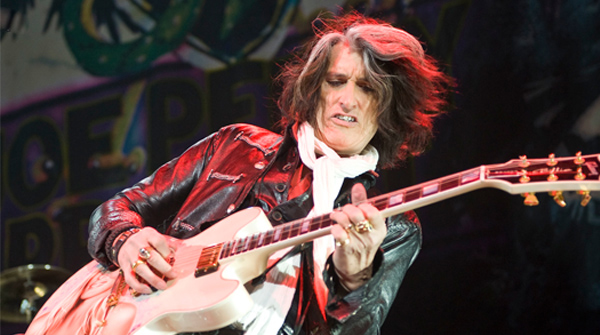 Aerosmith's Joe Perry is set to release his long awaited memoir, "Rocks: My Life In And Out Of Aerosmith", on October 7th via Simon & Schuster.

To coincide with the book's launch, Perry has announced he will be taking part in four book signings in New York, Brooklyn, Chicago and Los Angeles.

On the book's release, Perry said: "I've wanted to write one for a while. But Joey put his book out and I wanted to leave some room there and then Steven put his book out. I didn't want to make it seem like mine was an answer to his, so I waited a little longer."

He told Rolling Stone (via Blabbermouth) that he had read Tyler's book, and said: "It's definitely Steven's truth, no doubt about it. He's allowed to perceive things how he perceives things. He can write his book any way he wants. But I didn't agree with a lot of the things he said. I know he worked hard on it, but it's got a totally different tenor and energy than my book. Mine tends to be a little more traditional. It's an autobiography in the real classic sense. I just hope Steven accepts the things I say about how I felt and how I saw things happen. I don't put words in other people's mouths or talk about conversations that I wasn't there for."

The Aerosmith co-founder worked on the project with author David Ritz, who has also worked on books with Jerry Wexler,  B.B. King, Aretha Franklin, Scott Weiland, Smoky Robinson and more.

Perry is currently on a North America tour with Aerosmith & Slash on the Let Rock Rule tour.

Joe Perry "Rocks: My Life In And Out Of Aerosmith" Book Signing Tour