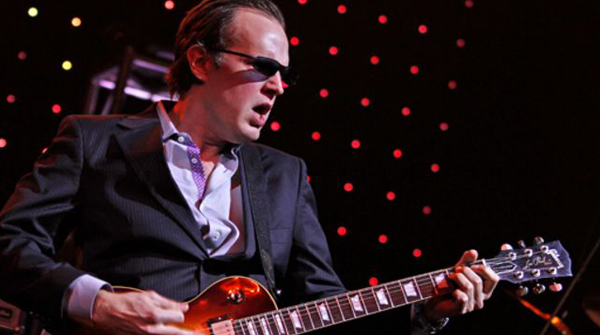 Joe Bonamassa has revealed that his new solo album, 'Different Shades of Blue' will be released on Monday 22nd Sept through Mascot/Provogue.

'Different Shades Of Blues' is the GRAMMY-nominated blues icon's first solo effort since 'Driving Towards the Daylight', which debuted at #2 on the UK Album Chart following its release in 2012.

“It’s been a while since I’ve been involved in the writing on an entire album, “ says Bonamassa.

“So I decided I wanted to make a completely original blues album. I’ve really had to push myself to make everything I do better than the last project. I know the fans expect it. And I feel like I owe it to the fans to give them an original record after all these years.”

Recorded at Studio At The Palms in Las Vegas, NV, DIFFERENT SHADES OF BLUE was produced by Kevin Shirley (Black Crowes, Aerosmith, Led Zeppelin), who has helmed Bonamassa’s last fifteen projects, including his collaborations with Black Country Communion and Beth Hart.

News of the album comes ahead of Bonamassa’s appearances at this weekend’s Download Festival, and at London’s Calling Festival on June 28th, where he plays as main-support to Aerosmith.

Bonamassa has twelve #1 Billboard Blues Albums and received his first GRAMMY nomination in 2013 for his collaboration with Beth Hart on the duo’s second album Seesaw. His 2013 solo acoustic project An Acoustic Evening at the Vienna Opera House was nominated by the Blues Music Awards for “Best DVD” and his 2009 DVD Live From The Royal Albert Hall recently received BPI Gold Certification.

For a free MP3 download of Driving Towards The Daylight, visit www.jbonamassa.com