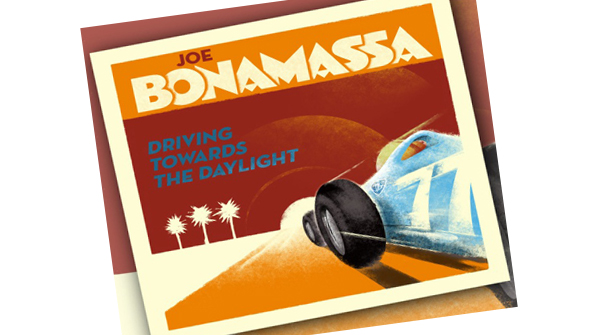 Recorded solely at The Village Recorder in Los Angeles, CA and Studio at the Palms in Las Vegas, NV, Driving Towards The Daylight is described as a 'balanced and back-to-basics album that highlights Bonamassa's signature style of blues, roots, and rock & roll.'

"We've taken some really traditional old blues songs - the Howlin' Wolf song 'Who's Been Talkin' and Robert Johnson's 'Stones In My Passway,'" says Shirley, "and we've tried to imagine how they would do them in a rock context. It's a very exciting return to the blues in a very visceral way. It's vibrant and it's gutsy and it's really, really rugged."

Brad Whitford, speaking from the studio in Vegas, said, "This is definitely more influenced by the stuff that the guys and musicians in this room love, early '60s English and American rock and blues. I guess we'll never get that out of our system and its fun to come in here and find our own path down that highway."

Driving Towards The Daylight is also available in limited edition digibook format which includes 72-page booklet with exclusive photographs and interview with the man himself.

Driving Towards The Daylight tracklisting

1. Dislocated Boy
2. Stones In My Passway~
3. Driving Towards The Daylight
4. Who's Been Talking
5. I Got All You Nedd
6. A Place In My Heart
7. Lonely Town Lonely Street
8. Heavenly Soul
9. New Coat Of Paint
10. Somewhere Trouble
11. Too Much Ain't Enough Love (w/ Jimmy Barnes)

We was lucky enough to catch up with Joe for an exclusive interview and jam session in Issue 4 of Guitar Interactive Magazine. The feature also includes an in-depth Bonamassa gear section, including Joe's very own Lazy J amp, and a full analysis and review of the fabulously rare and expensive '59 Gibson Les Paul.