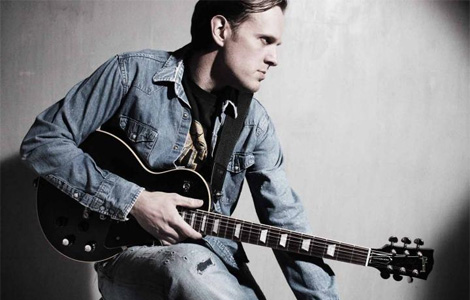 Blues-guitar superstar Joe Bonamassa, will release a brand new solo album Driving Towards The Daylight, billed as his "lucky" 13th album on May 22, 2012.

'Driving Towards The Daylight' was produced by Kevin "Caveman" Shirley (Black Crowes, Aerosmith, Led Zeppelin) and is their seventh collaboration in six years.

Recorded at Studio At The Palms in Las Vegas, NV, The Village Recorder in Los Angeles, CA and The Cave in Malibu, CA, Driving Towards The Daylight is a balanced back-to-basics album that highlights Bonamassa's signature style of roots blues with rock-and-roll guts, while honoring the traditions of the original blues musicians. "We've taken some really traditional old blues songs - the Howlin' Wolf song 'Who's Been Talkin'?' and the Robert Johnson song 'Stones In My Passway,' and we've tried to imagine how they would do them in a rock context," said Shirley. "It's a very exciting return to the blues in a very visceral way. It's vibrant and it's gutsy and it's really, really rugged."

Brad Whitford, speaking from the studio in Vegas, said, "This is definitely more influenced by the stuff that the guys and musicians in this room love, early '60s English and American rock and blues. I guess we'll never get that out of our system and its fun to come in here and find our own path down that highway."

To support the release, Bonamassa's label J&R Adventures premieres the reality mini-series "Countdown to Daylight" which debuts today and you can watch it below. The official music video and free download for title track "Driving Towards The Daylight" will be unveiled on May 1.

Pre-order your copy now at www.jbonamassa.com/dttd