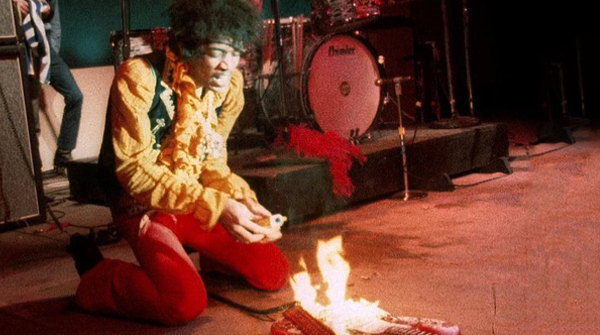 Jimi Hendrix cherished Fender Stratocaster hassold for just under a quarter of a million this past weekend.

The black and white Strat is the same guitar which Jimi 'burnt'on stage at the Monterey International Pop Festival back in1967.

Hendrix famously poured lighter fluid over the instrument beforestriking a match and setting fire to the instrument. The image of aHendrix knelt down with a guitar engulfed in flames in-front of himhas become one of the most iconic rock images in history.

However, Hendrix was said to have been so fond of the Fenderthat he couldn't destroy it, and switched the guitars secondsbefore.

The guitar then fell into the hands of James 'Tappy' Wright, whowas a manager at Hendrix's label home, Anim Limited.

The guitar was given a pre-sale estimate of Â£120,00 but sold fornearly double that amount after going under the hammer.

Mr Wright explained the story behind the 'stunt,' he said:

"The Who went on before Hendrix and Townshend smashed hisguitar up and put the neck into the amp.

"Jimi was annoyed at this and asked for some lighter fuel.He just wanted to outdo Pete Townshend.

"He played the black guitar for most of the act and thenright at the end he swapped it for a repaired one that he set fireto.

"At the time the black Fender was his favourite guitar andhe didn't want to ruin it."

"Hendrix only burnt two guitars in his career; the one atthe Astoria and the one at Monterey.

"He used the black Fender for three quarters of the concertand he swapped it at the last minute.

"People who were there would have known of the swap andHendrix fans may well be aware but it is not widelyknown."

The Black and White Fender Strat which belonged to Hendrix soldfor Â£237,000 at London's Fame Bureau.