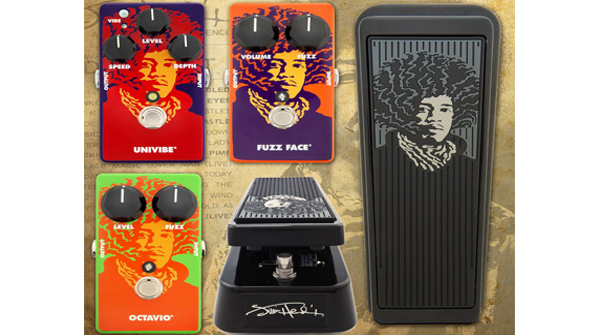 This past November (2012) marked Jimi Hendrix's70th birthday, and Jim Dunlop celebrated by releasing the LimitedEdition Jimi Hendrix 70th Anniversary Tribute Series. It's made upof the four effects that were crucial to Hendrix's signal chain:Fuzz Face, CryBaby, Octavio and Univibe.

Designed by the MXR team, the Fuzz Face, Octavio and Univibecome in Phase 90 -sized housings with modern upgrades such as truebypass switching, bright LEDs and 9-volt power jacks. The JimiHendrix Signature Cry Baby, along with the other three pedals, isadorned with art inspired by John Van Hamersveld's classic posterfrom Hendrix's 1968 Shrine Auditorium gig.

The Jimi Hendrix™ 70th Anniversary Tribute Series Univibedelivers the classic shimmery, washy tones of vintage Hendrix inall of their stunning analog glory, and at a fraction of the sizeof the vintage Shin-ei unit that Hendrix used in late '69/'70.