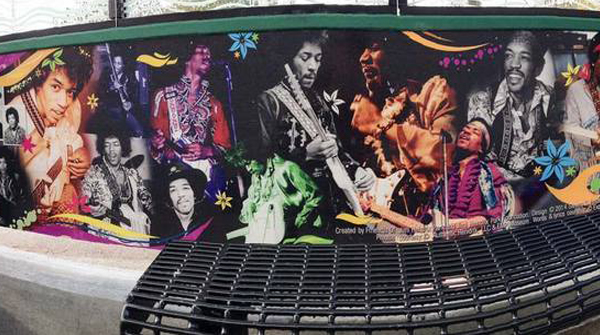 Jimi Hendrix's memory continues to resonate around the city of Seattle long after his untimely death in London in 1970.

Now, to fuel Hendrix's legacy even further a newly unveiled bus shelter in the Central District will honour one of history's greatest guitarist.

The tribute is a fitting nod to Hendrix classic 'Spanish Castle Magic' in which he sings of a journey to a club situated on the outskirts of Seattle which took a half day travelling by dragonfly. But, the dragonfly was actually one for the city's Metro buses.

The collage has been designed by longtime Experience Hendrix graphic artist Steven Pesant and includes rare images which span Jimi's life from childhood to his adult years.

"The design that we came up with really shows the journey of Jimi's life from beginning to end. And it's very colorful and reflective of who he was as an artist and his iconic fashion," says Janie.

The Hendrix themed bus shelter is situated in the neighbourhood in which Hendrix grew up, close to the upcoming Jimi Hendrix Park and Northwest African American Museum.