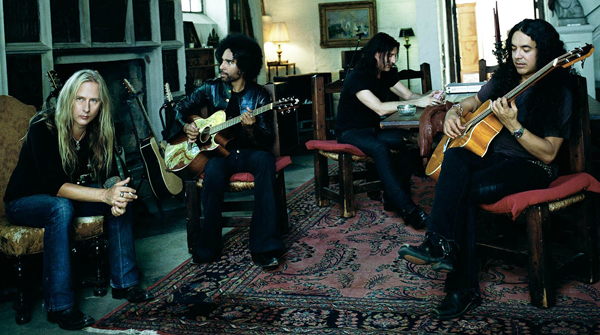 The new record, which will be the follow up to 2009's'Black Gives Way to Blue,' was recordedin Los Angeles with producer NickRaskulinecz.

"We've made a unique record that's completely different fromanything we ever did. It encapsulates a period of time, like allrecords do. You see growth and that the band is moving ahead in newterritory that we haven't been to before, but we haven't lost ouridentity."

"There's some real filth in there. That's intentional, andthat's also just how we sound together. We're trying to make arecord that we dig and we're trying to keep the bar high forourselves and see if we can get past it, and I think that we didagain. And of course you want people to dig it too and to respondto it, and to have that start happening is satisfying."

On the initial response from fans to the opening track 'Hollow,'Canrell said:

"The initial response to 'Hollow' has been fucking incredible,totally not what we intended, and that's fucking awesome. We justput that song out there for the fans and then it ended up turninginto a number one single, a six-minute sludgy metal tune. That'salways fun, to see something like that happen."

'The Devil Put Dinosaurs Here' is theupcoming fifth studio album by the American rock band Alicein Chains and is expected to be released in May 2013.