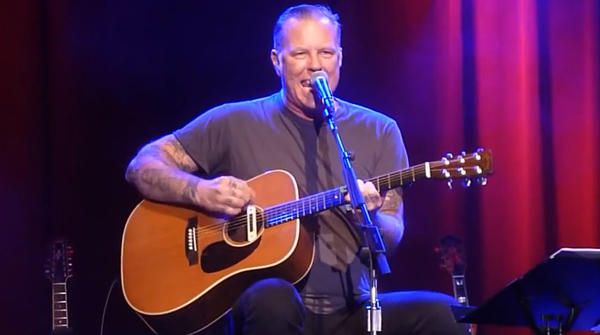 The second annual "Acoustic-4-A-Cure" benefit concert went ahead this past Friday in San Francisco.

Co-hosted by Chickenfoot vocalist Sammy Hagar along with Metallica's James Hetfield the fundraising event was for the benefit of the Pediatric Cancer Program at UCSF Benioff Children's Hospital.

Alice in Chains founder Jerry Cantrell performed Pink Floyd's "Wish You Were Here" as well as Alice in Chains track "Brother" and Rolling Stone's "Dead Flowers". During his set and was joined by Hetfield for an unplugged rendition of Blue Oyster Cult's "(Don't Fear) the Reaper" and “Mama Said”.

The charity event also saw Sammy Hagar deliver a soulful rendition of “The Thrill Is Gone,” honouring the late B.B. King, “Halfway to Memphis” and a lethargic cover of Jefferson Airplane‘s “Somebody to Love” with Linda Perry, as well as Chickenfoot‘s “Sexy Little Thing” and “Bitten By the Wolf.”

Metallica head Hetfield accompanied his 16-year-old daughter Cali on acoustic guitar while she sang the Adele song “Crazy for You.