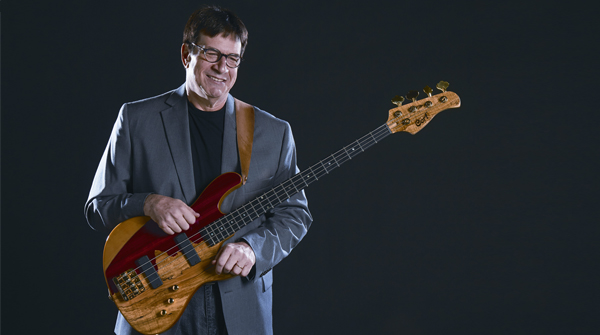 Cort Guitars and Jeff Berlin have collaborated to release the Jeff Berlin Signature bass guitar for 2014. The new model will debut in January at the NAMM Show located in Anaheim, California and begin shipping to dealers in February.  To celebrate, Berlin will be on hand to demonstrate the new bass during NAMM.  An official European launch will begin in March starting with the London Bass Guitar Show followed by various clinics around Europe and culminating at the Musikmesse Frankfurt.

Called the RITHIMIC, the bass features an alder body with a spalted maple and padouk top.  Outfitting the body are a pair of Bartolini Jeff Berlin custom soapbar pickups, a Babicz FCH4 bridge, one volume control, one balance control, one tone control, passive electronics and gold hardware. The hard rock maple neck is complemented with a rosewood fingerboard and four inline headstock featuring Hipshot Ultralight tuners.  The action on the bass is low and it is set up with DR Strings Custom DDT (Drop Down Tuning) for easy playing.

Berlin is known as one of the greatest bass players in the world and is also considered one of the finest clinicians in music.

Demonstrations during the NAMM Show are scheduled for Friday, January 24 and Saturday January 25 at 11AM and 2PM at the Cort booth #4458, in Hall C.

Find out more at Cort Guitars.