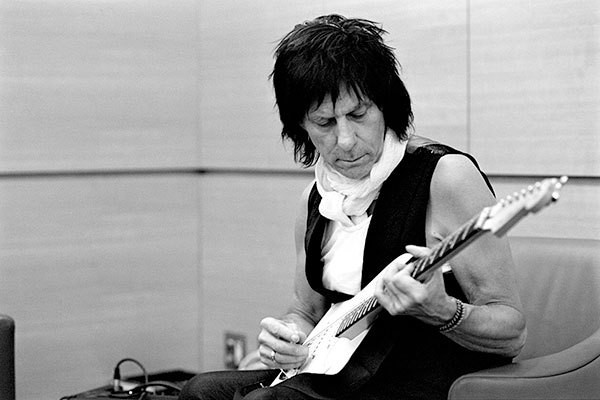 The Grammy-winning rock guitarist Jeff Beck has died, his family announced. “After suddenly contracting bacterial meningitis, he peacefully passed away yesterday,” the family shared in a statement. “His family ask for privacy while they process this tremendous loss.” Beck was 78 years old.

Geoffrey Beck was born in Wallington, South London, in 1944. He sang in a church choir as a child, and picked up the electric guitar as a teenager; he even fashioned a homemade model imitating the famous Gibson Les Paul. Like many British teens at the time, he idolized American blues and rock’n’roll artists—particularly Buddy Guy and Gene Vincent.

Beck played in a handful of local bands in the early ’60s, such as the Rumbles, the Tridents, the Night Shift, and Screaming Lord Sutch, but he got an even bigger break when Eric Clapton decided to leave the Yardbirds in 1965. Beck joined after another local guitarist—Jimmy Page—recommended him to the remaining members. Beck notably played on the 1965 album For Your Love—the title track of which became one of the group’s biggest hits. He also recorded on “Shapes of Things,” which appears on the Yardbirds’ 1966 self-titled LP.

Beck’s stint with the Yardbirds was brief; he left in 1966 and released his debut solo album, Truth, two years later. Beck-Ola, his first studio album released under the Jeff Beck Group moniker, arrived in 1969. The initial lineup featured Rod Stewart on vocals, Ron Wood on bass, and Tony Newman on drums. That same year, Beck was in a car accident that left him with a fractured skull.

By 1971, Beck had reformed the Jeff Beck Group. The new lineup included Bob Tench on lead vocals, Clive Chaman on bass, Cozy Powell on drums, and Max Middleton on piano. They released Rough and Ready that year, followed by a final, self-titled LP in 1972. Both albums flirted with the foundations of what would be later known as jazz fusion.

Beck returned to a solo career in 1975, when he released Blow By Blow—a fully-formed jazz fusion LP. The album was produced by famed Beatles producer George Martin, and would end up going platinum in the U.S. His follow-up, 1976’s Wired, also went platinum.

Beck slowed down in the 1980s due to his struggles with tinnitus, though he did issue Flash in 1985 and Jeff Beck’s Guitar Shop in 1989. Flash would land Beck his fist-ever Grammy Award—its single “Escape” took home the trophy for Best Rock Instrumental Performance that year. He would win seven additional Grammys during his lifetime, most recently in 2011, when he picked up three awards.

The 1990s were a particularly collaborative decade for the musician, who worked with Tina Turner, Jon Bon Jovi, Kate Bush, Roger Waters, and his teen idol Buddy Guy, during those years. He also released his 1999 LP Who Else! along with a handful of albums throughout the early 2000s. His most recent release was a 2022 collaboration with Johnny Depp titled 18. Beck had been performing live with the controversial actor not long before his death.

Following the news of Beck’s death, a number of musicians have paid tribute on social media, including Brian Wilson, Gene Simmons, Sean Ono Lennon, and more.