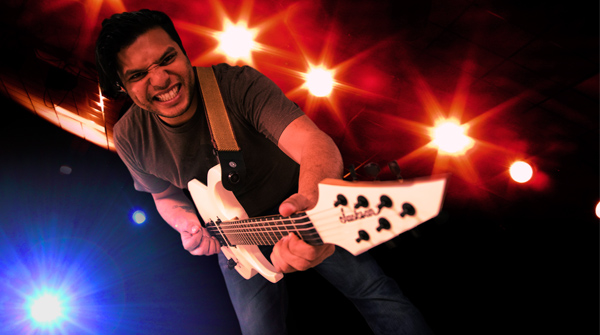 As the lead guitarist for one of the world’s biggest-selling rock bands, Def Leppard’s Phil Collen has deftly wrung numerous classic riffs from Jackson guitars. It’s impossible to imagine the ‘80s and ‘90s rock charts—or Jackson history—without him, as he’s been a Jackson endorser since 1986.

Collen’s PC1™ Dinky™ was one of the original Jackson signature instruments, and continues to stand out in modern times with its staple exotic woods and a Jackson Sustainer/Driver.  New for 2017, Collen’s revered USA signature models have been refreshed to match his latest tastes and specifications with the new USA Signature Phil Collen PC1™ Matte and USA Signature Phil Collen PC1™ Satin Stain models.

Available in Satin Black with White Pinstripes and Satin White with Black Pinstripes.

Available in Satin Black with White Pinstripes and Satin White with Black Pinstripes.

One of the most influential and respected players in the world, Marty Friedman’s impactful and game-changing contributions to heavy metal and guitar in general continue to inspire generations of musicians and music fans to this day. He defined modern guitar playing with Jason Becker in Cacophony, was a key element in the wildly successful rise of thrash pioneers Megadeth, and with his “Marty-esque” improvisations and exotic fusion of Eastern and Western music, has achieved global success with his 12 solo albums.

This 24.75”-scale signature guitar is loaded with premium features to match the demanding needs of an elite and intricate player like Friedman, including a mahogany body with 3/4” plain maple top, one-piece mahogany set-neck with graphite reinforcement and scarf joint, and a bound 12” radius rosewood fingerboard with 22 wide medium jumbo frets and mother of pearl block inlays.

Available in Gloss Black with White Bevels, black hardware and Jackson’s reverse 3x3 (3 over, 3 under) AT-1 headstock. Hardshell case included.

This 24.75”-scale X Series signature model is also loaded with great features, but at a more affordable price.

Marty Friedman dual EMG® MF signature humbucking pickups deliver a sound that sings and screams. Equipped with two volume and two tone dome-style controls as well as a three-way toggle switch to wrangle all of the subtle nuances out of the guitar's tone. Also features a Jackson® compensated and adjustable bridge and die-cast locking tuners for increased sustain and tuning stability.

Available in Gloss Black with White Bevels, black hardware and a reverse Jackson 3x3 (3 over, 3 under) AT-1 headstock.

Djent forefather and speed demon Misha Mansoor has gained widespread acclaim as the mastermind behind the axe-centric progressive metal band Periphery. He’s known to impress the most discerning of metal fans with his steadfast, fleet-fingered technique, and his personally designed collection of Jackson signature Juggernaut instruments is sure to set any shredder’s tone ablaze.

For 2017, Jackson adds new Pro Series versions of his Juggernaut models, offering many similar features as his U.S.A. model with a price tag that is easier on the wallet.

The Pro Series Misha Mansoor Juggernaut HT7FM shares the same specs as his Juggernaut HT6 but with a few modifications.  A 7-string guitar, the HT7FM features a 26.5”-scale length, a striking flame maple top, a Jackson HT7 string-through-body hardtail bridge and reverse Jackson 4x3 (4 over, 3 under) AT-1 headstock.

Available in Oceanburst and Charcoal Burst.