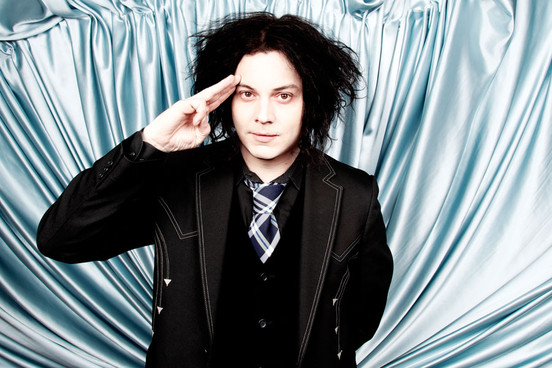 Jack White was the featured guest on Thursday's edition of TheColbert Report.

Jack joined the host to talk about his newalbum, "Blunderbuss," and to perform his latestsingle, "Freedom At 21."

The garage-bluesman has hinted that there will be a swift followup to his debut solo album 'Blunderbuss', saying that he still has12 songs that are as yet unfinished.

Speaking about recording his debut solo album, he told Radio 1'sZane Lowe: "We had enough for an album at one point, but I justkept going…I've got another 12 songs that I haven't finishedyet."

He added: "There's songs that White Stripes never really playedlive, or Raconteurs never really got that into, or songs that Ibrought to the table in a band - songs like 'Buffalo' - and now Ican elaborate on them".

Speaking of his new set-up with one all-male and one all-femaleband and lack of set-list for live shows, White said: "The easything to do would be to go and find four or five guys to play injust like the record and stand behind me. I just didn't want tobore myself to death and bore people with that jazz and it just tojust be some nostalgia thing"

He continued: "If we're going to play a Dead Weather track, aRaconteurs track or a White Stripes song or whatever it is, itneeds to be alive in the moment. It has to be something new toeverybody on stage, it can't be some recreation of something fromyears ago. I don't wanna waste my time doing that."

White played his first ever UK solo show this week (April 23),headlining London's HMV Forum the day 'Blunderbuss' was released.His debut solo effort looks set to score him a Number One albumthis Sunday (April 29) and is on course to knock Adele off the topof the charts, according to the Official Charts Company. He is alsoon course to hit Number One of the Billboard 200 chart in the USnext Wednesday (May 2) as well.