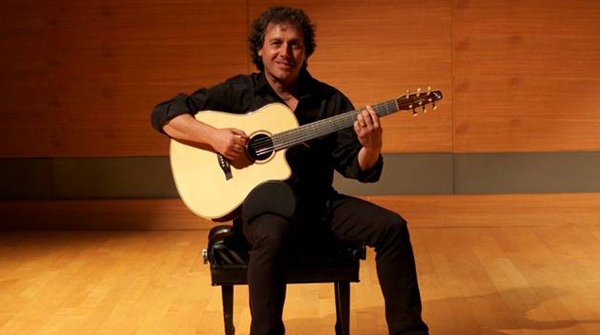 After a long history of touring and success in the USA, Canada and continental Europe, Italian fingerstyle guitarist Peppino D’Agostino has announced he will be heading to Great Britain to perform a number of shows in May.

Peppino D’Agostino emerged on the musical scene in the late 1980’s and helped redefine the boundaries of the acoustic guitar. His virtuosic technique, penchant for open tunings and percussive effects are the basis of his unique compositional style which has been inspiring musicians and audiences alike for years.

Since his debut release ‘Bluerba’ which was recorded in his native Italy in 1981, D’Agostino has performed in more than 26 countries. He’s been featured at prestigious international music festivals in Montreal, Los Angeles, Vancouver, and Ravello and performed in world-renowned venues such as the Kölner Philharmonie in Cologne, the Palace of Fine Arts in San Francisco, and the Cemal Reşit Rey Concert Hall in Istanbul. He frequently plays with prominent artists around the world, including Tommy Emmanuel, Leo Kottke, Martin Taylor, and Eric Johnson. His 17 recordings include releases on Favored Nations, Mesa/Bluemoon, Acoustic Music Records, and other labels.

“Music is not only what you know musically, but also what you experience in life, because it is a reflection of our personalities and spirit,” he explains of his philosophy on composing.

He began playing guitar at the age of 10 when he heard his cousin play in church. After D’Agostino got a few lessons from the cousin, he embarked on a journey of self-study and further exploration on the guitar and in music that continues today. From his teens into his twenties, D’Agostino learned about and absorbed many musical colors and flavors, being so enthralled with everything there was to learn about music and his chosen instrument that he went AWOL one night from the Italian Army to catch a concert by some acoustic guitarists he admired.

His current album ‘Penumbra’ has met with positive reviews and airplay around the world, the perfect illustration of how D’Agostino is balancing his interest in classical guitar and his older steel-string style. Opening with a Baroque-sounding theme played with great sensitivity and feeling, the piece, which is in one of D’Agostino’s trademark open tunings, segues into a rhythmic section in 9/8 that references his rock and ethnic-influenced style.

Fans of innovative acoustic guitar mastery will be immediately drawn to Peppino and his music – don’t miss this rare opportunity to see him perform live in the UK.